When the parents of five foster children mysteriously disappear, the kids decide to investigate – and are dragged into an adventure in which the secrets of the Ludwig family are gradually revealed. 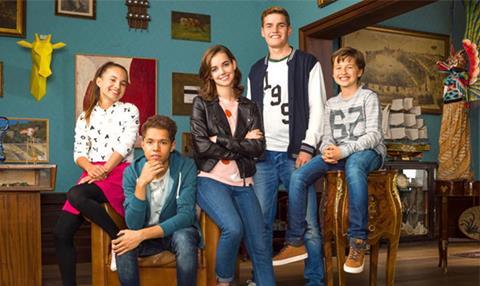 At the same time, they have to deal with the pressing issue of keeping the household – an imposing Amsterdam canal house that also serves as a museum – going.

The children are not only focused on the recovery of their foster parents Kate and Erik while solving the mystery of their disappearance, they must also fend off the Ludwig’s “greedy and duplicitous heirs”, and prevent others from discovering that their parents are gone.

Hunter Street started life as Dutch series De Ludwigs, which debuted on Nickelodeon Nederland and Nickelodeon België last May, before being remade for an international audience.

The international version shares the same sets, scripts and production crew as the Dutch version, recreating the Ludwigs’ home on an Amsterdam canal.

In fact, the original series was commissioned with a global remake in mind.

“De Ludwigs can be seen as the dress rehearsal for the rest of the world,” says executive producer Rogier Vissier. “Hunter Street is a jewel in Nickelodeon’s crown,” adds Caroline Beaton, senior vice-president of international programme sales at VIMN.

“It has all the qualities of an instantly recognisable Nickelodeon live-action series – fantastic writing, brilliantly relatable characters and exceptionally high production values – made even more special by the backdrop of a highly atmospheric set in Amsterdam.

“It’s a fabulous example of a show that blends mystery, comedy and iconography that the world adores. Kids and parents who love the twists and turns of a whodunit will definitely not be disappointed.”

Hunter Street could become “a truly global hit”, she adds. “Following the overwhelming response from Nickelodeon fans in the Netherlands for De Ludwigs, it was clear that the show had universal appeal to excite and entertain kids everywhere.”

The series debuted in the US on 13 March and will launch in the UK on 24 April.