The innovations helping the Cricket World Cup widen its appeal 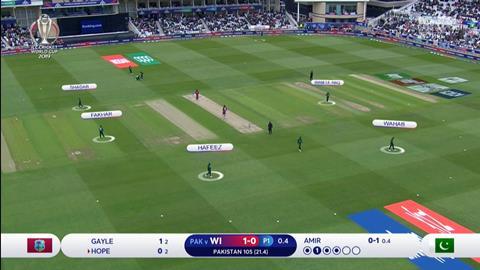 The production of the Cricket World Cup 2019 has pushed the boundaries of innovation, utilising top-end tech such as the Spidercam; AR graphics; a Buggy Cam capturing close-ups of the fielders and crowd reactions; drones shooting aerials of the grounds and establishing shots; and, back on the ground, up to 34 ‘conventional’ camera positions per match.

Many of the innovations centre on the on-screen graphics, which, for the first time, utilise player tracking data and live data from the Spidercam, to produce creatively appealing analysis of player and performance stats.

Broadcast Sport was invited to Lord’s to speak to the production team and host broadcaster ICC TV during England’s ill-fated group stage match against Australia (which Australia won by 64 runs) on 25 June.

ICC TV senior manager – broadcast/executive producer, Ajesh Ramachandran, told Broadcast Sport: “Everything is done under the ICC TV umbrella, which I manage. Within that, Sunset+Vine lead the production services, working with NEP, Hawkeye, Alston Elliot (AE Graphics), Spidercam, Batcam and a number of other partners.

“We planned the production together and have been working on how we can maximise the impact of our coverage for the last few years. Our objectives are to engage and connect with new audiences and expand the reach of cricket through new engagements with the sport. We want to satisfy both long-term fans and new viewers.” 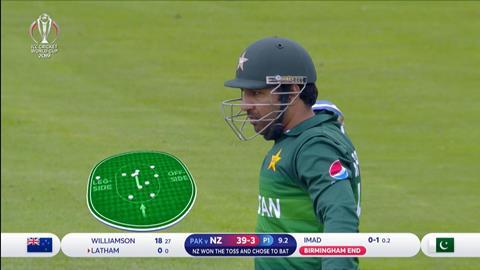 To that end, one of the key differentiators compared to previous Cricket World Cups is the quality and quantity of the on-screen graphics. “One of the things we’ve brought in is player tracking graphics, and other uses of AR graphics,” says Ramachandran. “The look and feel of these is very dynamic and young. We tried out a few ideas at the Champions Trophy, including a live plot of the location of the fielders, and we’ve used some of the more successful ideas from that tournament as a basis for the graphics for the Cricket World Cup.

“There’s already a lot of analysis around batting and bowling, and the enhanced on-screen graphics we’re now creating helps the commentators bring out technical observations to explain the different strategies of the teams and players,” he adds.

The graphics have been designed by AE. Its project manager for the Cricket World Cup, Terry Charlton, picks up the story: “We’ve created 150 pre-set Vizrt graphic templates, so we have lots of toys to play with. AR is one of the focal points for us in reintegrating the graphics. We’ve incorporated the core graphics style into the AR.

“We did a lot of R&D to find new angles and using Spidercam to reinvigorate what we’re doing. A lot of thought goes into how best to present the data so the viewer knows what’s going on. We’re using big punchy text, photos and stats to help appeal to a younger demographic. One of our graphics shows the live location of all the players on the field, which uses player tracking from two Chyron Hego cameras.”

Another of the more advanced graphics is created through sports graphics analysis system Piero. It takes in different camera feeds and stitches them together to make a combined video that can be used for 360-degree spin-arounds. The system uses existing broadcast camera positions and the 360-degree replays can be created within around eight minutes of any incident. A range of data and graphics is also provided by Hawkeye for ball mapping. This is created in a very similar style to that established for the other graphics. 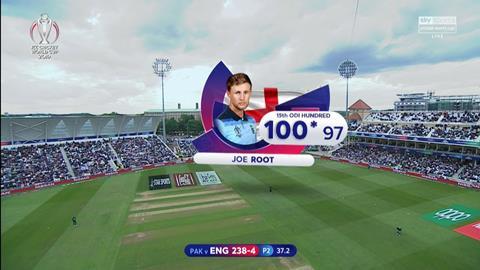 “Any graphic can be shown using the Spidercam AR – positional data from Spidercam is transferred to a graphics engine and, at key moments during the game, we target graphics using this information,” continues Kluth. “It’s data that would have been displayed before, but, using Spidercam AR, can be presented in a much more vibrant way.” 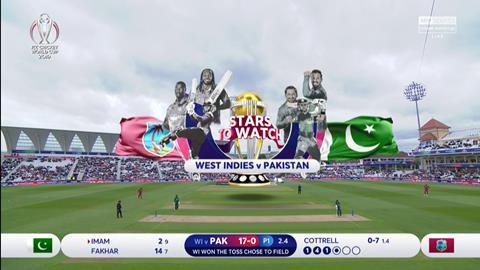 The commentary positions for the world feed commentary created by ICC TV, along with the BBC’s Test Match Special team and a variety of studio spaces for different global broadcasters, are all on the same floor in a prime location at Lord’s. It offers an incredible view of the pitch.

The commentators sit next to a sports analyst who provides stats and background information to add extra depth and context to the commentary. A producer/director sits at the back of the commentary box, cueing up replays, VTs, on-screen graphics and other content.

They liaise with a live director stationed in the less-than-glamourous confines of a temporary cabin situated in an unremarkable location somewhere in the grounds. Despite its lack of opulence, this is the heart of the live production, housing the world feed gallery, where camera feeds are live-mixed and the production takes shape.

Broadcast Sport met Sunset+Vine exec Huw Bevan here to talk through what happens in the cabin. “The live director – Gavin – is controlling everything; the cameras, VT area, and so on. He’s the conductor in an orchestra and all the crew listen to him. If there are special things they need to look for, he tells them. He calls the camera and replay sequence.

“An assistant controls the vision mixer, physically operating it, following Gavin’s instructions. The complexity of the mixing means it’s impractical for the director to vision mix at the same time as directing,” continues Bevan. “A third operator is the director’s assistant. They keep track of timings and work as a general assistant to the director. It’s their job to ensure the ad breaks of the different international broadcasters are correctly timed, so they all listen carefully to everything she says.

England’s next match is against Australia again on Thursday. Should England win this, Sky Sports has promised to make the final available to everyone to watch on free-to-air TV.