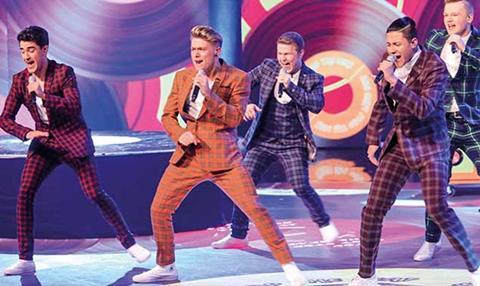 In the BBC1 series, Barlow is hunting for five boys to play the members of a boy-band in his forthcoming Take That musical.

The judges can award up to five stars to each contestant. Those who receive 15 or more stars progress to the next round.

This provides the show with its most unique format point: the star way. After the judges decide how many stars they want to award, a chain of stars on the stage leading towards the contestant begins to light up. If the one the contestant is standing on lights up, he’s through to the next round.

The staging for the show, designed by Take That’s stage designer Misty Buckley, is intended to replicate a theatre, with the audience surrounding the stage in a semi-circle.

The set and the proximity of the audience to the stage add a frisson to the performances and help to give the show a ‘live event’ feel.

Executive producer Guy Freeman says the scale and style of the set is meant to mimic the feel of a live gig.

“We knew we’d need a set that could be flexible, so we had lots of LED screens to create different moods. We didn’t want it to be virtual, we wanted something real and physical, hence the pillars and the roof to give it a sense of place,” Freeman says.

The same set was used throughout the four audition episodes, the three episodes in which contestants are put into groups, and the live shows.

The format includes a level of interactivity in the process, with the judging panel and experts’ opinions supplemented with viewers’ votes.

Although the UK show only auditioned boys for an all-male band, the format is designed to suit any groups who sing and dance together.

The series arc is of stars being discovered, forming bands and reaching their potential together to win a once-in-a-lifetime opportunity to perform in a real theatre show.

BBC Worldwide, which is distributing the format, believes it could have different applications in different territories, including casting for musicals, national events – even the Eurovision Song Contest.

“In the context of the world we’re in at the moment, people want nice, warm, feel-good shows, and this has that in spades,” she adds. “It’s also got a really strong visual identity with the star way.”

The distributor hasn’t closed any deals on the show yet but broadcasters from around 10 territories have come to the studio to watch it during filming, generating substantial interest.

“Once you get into the live shows, the bands are gelling and singing together as bands, but when it comes to the elimination, they’re judged as individuals and another band is put together. That’s an interesting mechanic for territories that want more than 10 shows and it’s a point that could be developed across additional shows,” she says.

Kendrick’s main focus is on exploiting that flexibility through format sales, although the show is also being distributed as a tape.