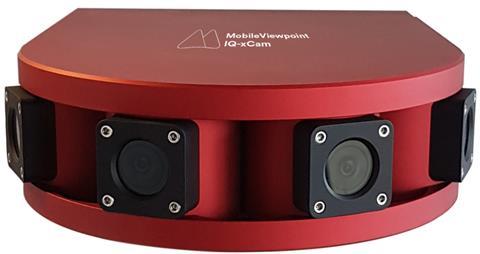 The IQ X-Cam IP camera can capture panoramic images in 12K at 60 frames per second. It comes in three configurations—with one, three or four 4K cameras (the X in the name denotes how many cameras are included – IQ 4-Cam, IQ 3-Cam and IQ 1-Cam).

The camera has one ethernet cable for the transmission of video content, and to power the camera. It comes with interchangeable lenses to suit different camera positions and content production needs.

Mobile Viewpoint’s IQ Sports Producer takes the panoramic images created by the IQ X-Cam and live tracks the movements of, say, footballers and the football, to create a live AI-directed transmission of the game.

Mobile Viewpoint CEO Michel Bais, said: “There’s a gap in the market for 60 frames per second IP cameras, and with our new IQ X-Cam we are enabling sports clubs and OBs to produce and distribute high quality content cost effectively.”

The IQ X-Cam will be available in November.