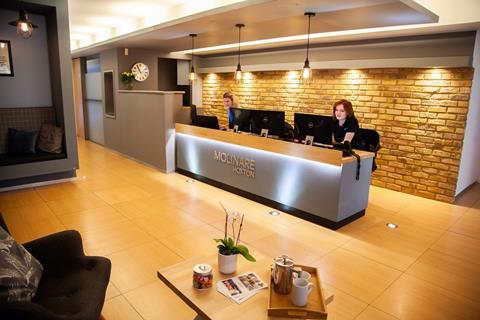 The upgrade includes the creation of additional offline suites, bringing the total to 10, as well as a dedicated Symphony Online suite and dedicated Resolve Grading suite.

The facility is running Avid Nexus shared storage for both offline and online and has a fully integrated Pro-Tools, 5.1 dubbing suite with voice over booth, in line with Molinare’s Soho facility.

Molinare’s creative and operational staff are working across both facilities.

“The plan has always been that the Hoxton facility is an extension of the brand experience our clients get at the Soho facility,” said Molinare operations director Lesley Marr. “These system integrations and staff rotations across MCR, operations and workflow ensure full compatibility for clients completing offline in Hoxton and finishing in Soho, but it also means that clients can now comfortably complete full post in Hoxton too if they choose.”

Molinare Hoxton facility manager Ellie Stanway said: “Historically Molinare Hoxton had been home to more short form projects however these upgrades, and the integration with Molinare Soho, means we are now fully equipped to handle both offline and finishing post for longer form factual projects.”

Meanwhile, documentary and factual production company Rogan Productions moved into Molinare Hoxton’s newly created production office at the end of October. Molinare completed full post on Rogan’s 2016 documentary The Confession and the recent Grierson winning BBC1 series Stephen: The Murder that Changed a Nation directed by James Rogan and produced by On the Corner Films in association with Rogan Productions.