Music programme: Adele At The BBC

The judges were impressed that the hour-long special had the “ambition to match the singing talent of the Chasing Pavements star”. 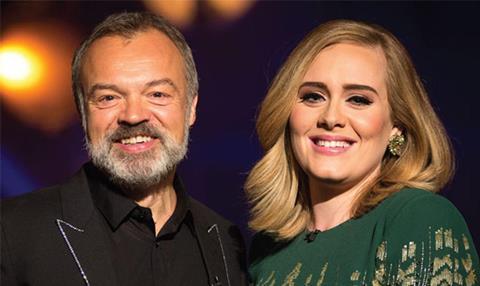 BBC Studios for BBC One

Adele At The BBC, which scored 5.8 million (22%) when it aired on 20 November 2015, was a coup for the broadcaster, with the first public performance of tracks from the XL Recordings star’s album 25.

The show included performances of new songs including number one single Hello, alongside earlier hits Someone Like You and Rolling In The Deep, and was filmed at The London Studios.

The judges lauded the production team for making the show stand out, using a combination of front projection, back lighting and a layered screen, powered by projectors, showing pre-filmed content.

They also highlighted the fact that they were able to “emotionally connect the music to the audience”.

In addition to the musical performance, the Graham Norton-fronted show included a comedy sketch, in which Adele auditioned alongside a group of Adele impersonators, posing as a nanny before revealing who she really was.

The skit, which has had more than 50 million views on YouTube, helped to show another side of the singer.

BBC Worldwide sold the special to broadcasters in 40 countries, including CTV in Canada, France 2, Nine Network in Australia and ZDF in Germany.

THE BRIT AWARDS
BRITs for ITV

An extended tribute to David Bowie, plus astronaut Tim Peake presenting Adele with an award from the International Space Station, were two of the main challenges for ITV’s production staff. The event included the O2’s heaviest ever set and the most screens used on any BRIT Awards, plus a near-naked model jumping into a link, and Simon Cowell appearing out of nowhere.

Producers of this live concert special used a 4K multi-camera set-up and moving cameras to inject some dynamism into the film, in which The A Team singer is the only person on stage and tied to his microphone. In addition, the team created video sequences timed to imitate Sheeran’s loop pedal, with tower cams, cranes and dollys all used to improve the texture and flow of the edit.

Designed to look like The Rolling Stones’ 1974 concert film Ladies And Gentleman, Lenny Kravitz instructed the producers to revel in the imperfection and honesty of classic concert movies. A multi-camera crew followed the rock singer across Europe for the film, which launched on Amazon Prime in the UK, Showtime in the US andWowow in Japan.

Chris Evans returned for a 10-part revival of C4’s 1990s entertainment staple, with guests including Coldplay’s Chris Martin playing a piano made of bananas, Justin Bieber racing down a 50ft slip-and-slide, and Lionel Richie playing piano on a moving desk.

The series was C4’s third biggest 8pm Friday night show of the year.

As well as marking the fi rst time that any channel has broadcast all 14 hours of this epic in one go, culminating in a live transmission of Götterdämmerung, this was the first time that Sky has brought together its Sky Arts channels in the UK, Italy and Germany.