NEP plans for life after fire

OB firm NEP Visions lost equipment and trucks worth “tens of millions of pounds” in the fire that gutted its Bracknell HQ last week. 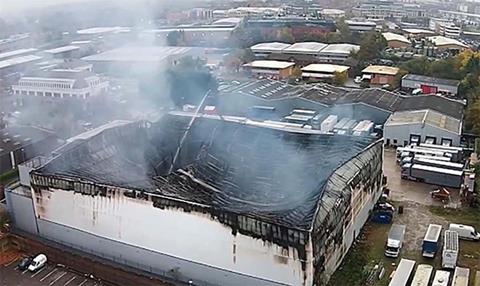 Speaking exclusively to Broadcast, US-based NEP Group chief operating officer Keith Andrews disclosed that everything stored in the derelict building on Tuesday (3 November) was destroyed, including a large inventory of cameras, lenses and live slow-motion replay servers, as well as six OB vehicles.

“All of the assets that were inside, including those trucks and the cameras, cabling and everything that we use to make our broadcasts come to air, has been lost. That is the stark reality,” he said. “We don’t know the exact value yet, but it is tens of millions of pounds.”

NEP Visions declined to divulge the full extent of the lost kit inventory, but three large OB units, including the two-vehicle Gemini and its HD3 and HD2 trucks, were destroyed in the blaze, along with NEP Group company Observe’s HD3 double-expander OB unit and a VT truck. A number of other trucks, stored outside the building, were driven away to safety.

It has also been revealed that at 1am on Wednesday, just two hours after flames began ripping through the building, Visions staff were already working on contingency plans to cope with the fallout, using the offices of Sloughbased sister company OBS TV.

Kit was ultimately sourced from within the NEP group - from both Europe and the US - and from UK-based equipment rental companies. Rival OB firms Cloudbass, Telegenic and CTV also provided assistance.

As a result, all of NEP Visions’ contracted sporting events were successfully covered last weekend, including Premier League and Championship football for Sky, and Channel 4 Racing.

“Many companies have offered assistance,” acknowledged Andrews. “We may end up, in the near term, working with one or two [third parties] on some projects. And, in the long term, with others on other projects. The industry has been very helpful and we’re grateful for that.”

NEP UK and Ireland president Steve Jenkins is now focusing on clients, employees and the day-today running of the business, while Andrews has taken on responsibility for long-term planning.

An interim strategy has been drawn up that takes the company through to February, but there is also a focus on the 18 months that follow. The initial search for temporary office space is under way and plans are in place to order replacement kit and to commission new trucks. The warehouse will also need to be rebuilt, with the company hoping that the loss can eventually be covered by the insurance policy.

“We’re not hindered in any way from getting on with life, which is the most important thing,” Andrews said. “In the near term, the business is still operating as it did, but we’ve lost assets and a building. We’re very transparent. If we have to put together a solution [for clients] that is not as elegant as what they might have had [before], they will understand. They will still get the outcomes they were hoping for.

“In the longer term, we will replace all the assets. We will be building new trucks. We are already working on how those trucks will be configured, although no orders have been placed as yet. From a corporate perspective, we will make [the company] stronger than it was before this happened.”

Options open to NEP Visions include fast-tracking vehicles that it already has in production or diverting part-built units that are currently on order for other companies within the Group. NEP also has a truck-building facility in the US, although it is hoping to be able to use the local market.

No one was hurt in the blaze, which is under investigation by Berkshire Fire Services. Although no official information was available as Broadcast went to press, it appears likely that the fire started internally.

When asked if anything would be done differently in the future, Andrews said: “We will review once findings come out. We operate all over the world. This operation was as good as any of those at policies, procedures, handling and practices. We’ve got no reason to be concerned in that respect, but we will certainly find what learnings can come out of it.”

NEP Visions is part of the US-based NEP Broadcasting group of companies that in the UK includes Bow Tie Television and Roll to Record, as well as a host of European- based OB firms. Across the UK and Ireland, NEP has 16 HD OB units and nine VT and support trucks in operation. It also has 32 more HD OB units in Europe.