Pinewood Shepperton is converting two film stages into TV studios in a bid to fill the void created by the closure of Teddington Studios. 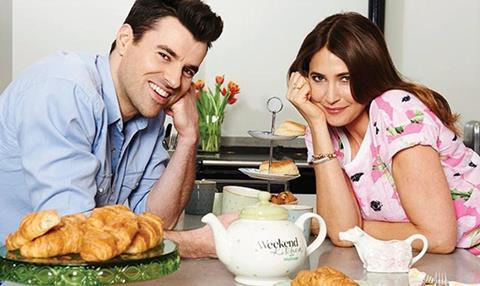 The 7,500 sq ft F Stage at Pinewood has already been made “TV-friendly”, with a fibre link created to the adjacent TV Three HD gallery in K Block.

Another larger studio will receive similar treatment once building work starts on Pinewood’s recently approved £200m, 1 million sq ft extension to its fi lm lot. The 19,000 sq ft R Stage or one of the 10,000 sq ft L and M Stages are the most likely candidates for conversion.

“Converting F Stage starts the rebuilding of our capacity for TV,” said TV sales director Mark Hackett. “Having lost Teddington, we now have clear ambitions to re-enter the light entertainment market with vigour and a more impressive joined-up offering.”

To convert F Stage, a Wall Box and Calrec Hydra have been installed for distributing video and audio, talkback capacity has been boosted and a generator and UPS power have been brought in for back-up. A Clarity graphics system and EVS server have also been added.

Spun Gold’s Weekend Kitchen With Waitrose for Channel 4 is the first show to use the converted F Stage. Gallery options for the second converted studio are still to be decided.

The additional capacity will also help to ease the recently highlighted lack of studio space in London, although Hackett insisted that this is more of a seasonal scheduling problem.

“Let’s stop talking about a lack of studio availability,” he said, pointing out that while September to November is “packed out”, August was a quiet month. “Instead, producers should talk to studios about when they do have capacity.”

Teddington Studios is to be redeveloped into housing by its owner Haymarket Media Group.