R&D findings from an environmental project that has become the subject of a one-off branded documentary are to be released as a technical white paper that could benefit wildlife and natural history documentary makers. 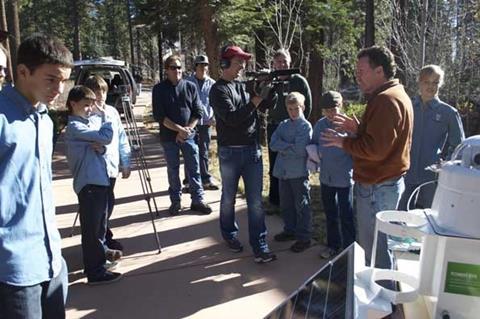 The Forest Guard Early Wildfire Detection System, developed for the early detection of forest fires, takes the form of a network of cameras that send real-time pictures of forests to the Internet, allowing volunteer fireguards from all over the world to look out for possible fires.

The idea was conjured up by home-schooled children from a small local community in Northern California and then ‘made meaningful in the real world’ by a team from Sony R&D in Basingstoke who took a standard security camera with pan, tilt and zoom capability and fitted it with WiFi, Solar panels and batteries and then mounted it on a pole.

Ethernet radio was used to send signals to a hub computer that took snapshots from the live feed and stored them in a web server on the Internet.  A free “Forest Guard” screen saver was made available to show the photos.

A year-long pilot has now been completed and the developmental findings are to be made available as a Sony white paper.

Sony R&D’s Morgan David, who led the mechanical and electrical work and the software design, said that the devices wouldn’t be put into production “because they’re too bulky” but suggested that nature programme producers would be the likely beneficiaries of the R&D work.

At the same time, The Forest Guards, a 1 x 52-min Sony-funded documentary about the project and the children who devised it, is to be distributed at this month’s MIP TV by TVF International.

“Increasingly, companies are looking at ways of engaging in environmental action through the core strengths of their brand, which in Sony’s case is through innovative technology,” said the film’s executive producer Victoria Brooks. “The project shows a genuine desire to do something that has an impact on a key global environmental issue.”

The Forest Guards is produced by Between the Eyes.