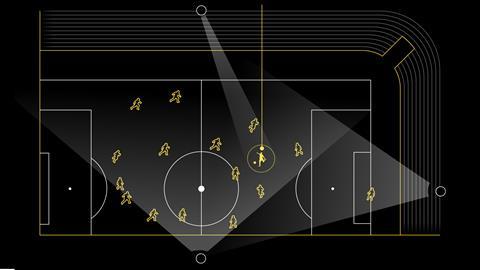 The robotic cameras are automatically controlled by ChyronHego Tracab data

The cameras use real-time tracking data from ChyronHego’s Tracab to accurately follow the action on the pitch. The cameras automatically adjust the zoom and focus to keep the players in the frame at all times.

The system at Brighton is from Mark Roberts Motion Control (MRMC) and called Polycam Player. There are seven robotic cameras mounted in very high up positions around the stadium. Each is in a fully waterproof casing, which can tilt and roll around the full 360-degrees.

Within each robotic pod is an Nikon DSLR camera that can deliver “extremely high image quality, even in poorly lit locations,” according to MRMC.

At Brighton, there are two robotic pods mounted high behind both goals, and another three cameras at the very top of one side of the stadium.

ChyronHego Tracab identifies and follows players on the field and provides instant live gameplay metrics. MRMC uses this data for the real-time synchronised movement of multiple robotic cameras. The algorithms that control this movement have been written with the analyst in mind and keep a wide angle of the view that is well-suited for tactical analysis.

While a single camera is enough to capture the wide angle view of all the action on the pitch, the additional cameras Brighton and Hove Albion FC have opted for, provide a number of additional views for its post-match player analysis. These include a tactical ‘high behind’ view from behind the goals at either end, and an analyst player camera, which is used to monitor individual player performance.

On a visit to the Falmer Stadium, Adam Birch, product manager at Mark Roberts Motion Control, told Broadcast Sport: “The tactical camera view gives you full pitch coverage of each game, showing all ten players (excluding the goalies), which can be dissected and used by coaching staff for post-match analysis. We’re also developing additional profiles to provide a full pitch view for broadcasters.

Polycam Player allows you to robotise your least exciting camera positions. The technical camera position is boring for a human operator, so rather than deploying them to capture this full field view, they can be freed up to focus on the creative side and film proper engagement shots, leaving the dull technical capture to the robotic camera.

It films the action with a natural feel and doesn’t jump around robotically. And it’s been designed to easily integrate into existing stadium infrastructure and take advantage of high camera positions that would be otherwise unreachable.”