There have also been Premiere Pro and After Effects updates 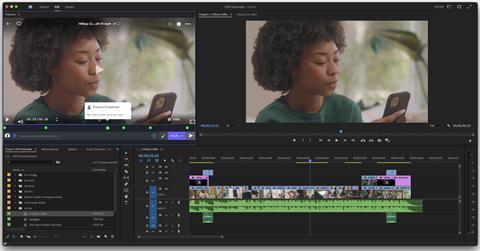 The integrated review and approval workflow for post-production aims to help editors get to final approval more quickly. It means that users can now share work in progress with an unlimited number of reviewers anywhere in the world, and get frame-accurate comments and annotations directly inside of Premiere Pro and After Effects, without leaving their timeline.

In addition, they can use Frame.io file transfer technology for uploading and downloading of media with 100GB of dedicated Frame.io storage; work on up to five different projects concurrently with another remote user; and work with Camera to Cloud to get footage from cameras to editors, motion designers and other stakeholders.

In addition, there have been updates to Premiere Pro and After Effects. These include native M1 support and AI-powered scene edit detection for After Effects, plus redesigned import, header bar, and export for Premiere Pro.

Native M1 Support now launches up to seven times faster and renders compositions twice as fast on M1 Macs compared to an Intel 10-core iMac Pro. This unlocks more creative possibilities for motion designers as they are now able to iterate their work faster than ever.
Scene Edit Detection Powered by Adobe Sensei uses the latest artificial intelligence (AI) and machine learning technology to automatically detect scene changes in an edited clip and places them as individual layers or creates markers at edit points for faster project setup.
Extended Viewer enables users to view 2D and 3D layers located outside a frame’s edge when using the Draft 3D engine; see more of the design, navigate 3D space; and move 3D layers more easily. Users can hide or dim the area beyond the frame to get a look at the final shot.
Binning Indicators for 3D Layers show which 3D layers render together in the same 3D space, enabling them to intersect and cast shadows on each other. This gives users a visual map of how After Effects composites 2D and 3D layers together.

- Reimagined Import, Header Bar and Export Experience - Following a successful public Beta, the redesigned core workflows are now more intuitive and visual:
- Import focuses on media rather than project settings, letting video creators easily scan and scrub files for assembling media from different locations. This makes it faster for pros and easier for new users to get started.
- Header Bar provides a cleaner, more centralised navigation so users can quickly switch between the core tasks of import, editing and exporting.
- Export lets users quickly upload media directly to popular destinations like YouTube, Facebook and Twitter. It features smart presets that take the guess work out of encoding and preparing files for delivery, making it easier for both new users and pros to deliver content.
- Auto Color Powered by Adobe Sensei uses AI to generate first-pass colour corrections. It acts as a guide to help new content creators become familiar with adjustments. It is also a jumping off point for experienced users to fast track their colour correction before moving on to secondary colour tasks, like skin tone or sky adjustments. Auto Colour was introduced as Auto Tone in Premiere Pro public beta in 2021.
- Performance and Workflow Improvements include the ability to show and hide markers by color, a Remix progress indicator for audio clips and improved trim mode playback looping.
- New Free Adobe Stock Assets including thousands of HD video footage, motion graphics templates and more, are now available in app to help create videos that stand out.

Steve Warner, vice president of Digital Video and Audio at Adobe, said: “The combination of Premiere Pro and Frame.io gives customers the world’s only end-to-end solution for video creation from ingest to editorial to output.

“This is the first step toward building a powerful, cloud-based platform for the future of video creation.”