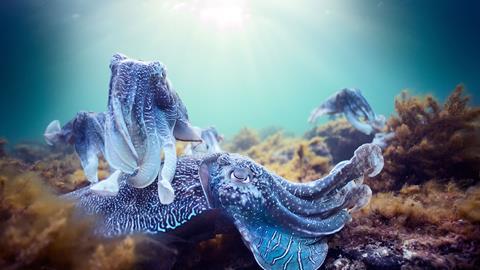 Brief Online, grade and deliverables for this landmark wildlife doc series. Presented and narrated by David Attenborough, the series explores the Earth’s oceans.

How it was done The colour grade was completed at Films at 59 in Bristol by freelance colourist Adam Inglis using Baselight. Each of the episodes was given its own individual palette to match its subject matter. The Deep, for example, features lots of black, while Reef is full of colour.

At the same time, Inglis ensured the whole series looked both natural and vibrant.

For the dark footage shot underwater, Inglis spent considerable time squeezing as much colour out of the images as possible by remixing the colour channels, adjusting specific colour hues and mixing between different grades within shots. Shots were graded in several different ways and then compared to see which approach worked best.

The online for the series was completed by Films at 59’s Franz Ketterer and Wes Hibberd. They beautified the images on a shot-by-shot basis, matching the varying source material provided, and enhancing and restoring as they went.

A bespoke online workflow was designed for Ultra High Definition (UHD) and High Dynamic Range (HDR) delivery as well as HD Standard Dynamic Range (SDR). The series was conformed and graded in Baselight within an ACES colour pipeline, and finished in Flame Premium. Digital Vision’s Phoenix film restoration tool and Adobe After Effects were also used.

Films at 59 was also responsible for the many deliverables on the series. With requirements for HD, UHD and HDR, as well as both stereo and 5.1 sound, more than 63 versions were required across the six-part series.

With a series of deadlines in mind, Films at 59 post-producer Miles Hall embedded the deliverables process into the post-production workflow from the outset. This meant that while the BBC TX version was the main focus, it was delivered after the worldwide and DVD versions.

To facilitate the different versions, the constituent parts that make up each programme – the stings, titles, main body of the programme, presenter-less sections, calls to action, the ‘making of’ diary, credits and end boards – were all treated as separate elements and then assembled just prior to delivery.

For the UHD HDR output, Films at 59 worked on a 25fps Hybrid Log Gamma (HLG) series for BBC Worldwide and a 23.98fps PQ one for Blu-ray distribution.

The audio was mixed by Graham Wild. The sound editors were Kate Hopkins and Tim Owens. BDH Creative did the graphic design.