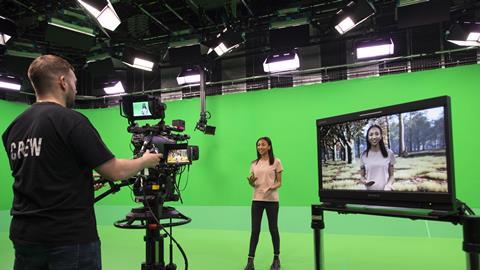 A series of small reflective stickers (stars) are placed at random on the ceiling of the studio. An LED sensor mounted on the studio camera then shines light on these stars, enabling StarTracker to report the position and orientation of the studio cameras in real-time.

The virtual studio system, which is being made available in all of Dock 10’s studios, makes it possible for productions to shoot in a green-screen studio space and immediately see the presenter in a photo- realistic virtual set that’s rendered in real-time.

Dock 10 has employed a team of graphics artists and Unreal specialists from the gaming world that can work with its clients on the creative and technical design of their virtual studio sets. “We do the pixels rather than the carpentry,” Dock 10 head of studios Andy Waters told Broadcast.

The facility will work with clients to create virtual studio sets using a wide range of pre-made assets. Alternatively, Dock 10 can import and embellish existing sets created in a 3D modelling package.

In addition to providing the flexibility to create endless permutations of studio environments, the virtual studio set-up offers other benefits over a traditional studio set. Waters explains: “There are so many cost savings in having a virtual rather than a real set, as it eliminates transportation, storage and rig/derig costs.”

He adds: “As a passionate promoter of technology in television, we regularly collaborate with broadcasters and production companies looking to explore new ways to make television. We recognised that advances in gaming technology could be used to drive a significant leap forward for virtual studios, with the ability to build otherwise impossible sets, opening up a world of exciting new possibilities for all programme-makers.”

The installation of the virtual studio set-up comes shortly after Dock 10 announced extensions to contracts with both the BBC and ITV Studios to host and post-produce a range of high-profile productions.

These include CBeebies and CBBC programmes such as Blue Peter, BBC1’s Match Of The Day, ITV’s Judge Rinder and, until recently, The Jeremy Kyle Show, Channel 4’s Countdown and ITV Studios’ University Challenge for BBC2.

The facility recently revealed that it had set aside £5m for investment in new technology. Earlier this year, it increased the scale of its post-production services and added a new creative production space called The Second Floor.

Dock 10’s virtual studios are currently undergoing testing in advance of the service being offered to clients later this year.

➤ See the next issue of Broadcast TECH for a showcase of recent real-time VFX projects, from live events to studio shows