dB Broadcast has delivered the first of four satellite vehicles that will replace the current fleet. 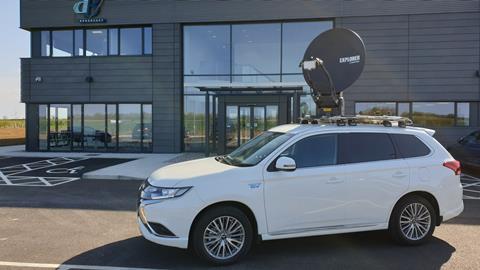 dB Broadcast delivered the new vehicle, which is commissioned on the latest Mitsubishi Outlander PHEV, an efficient hybrid vehicle. In addition, where possible, equipment was serviced and repurposed in keeping with the sustainability objectives. Mitsubishi Specialist Vehicle Operations removed the rear seats and added a custom bulkhead and twin-deck floor to allow for the installation of the technical broadcasting system.

The four cars will replace ITV Daytime’s current fleet, and have several additions brought in by dB Broadcast. A battery/inverter system has been integrated for a clean, silent operation, and two solar panels are on the roof to supplement the technical battery.

Head of technology for Daytime, Tim Guilder, said: “This new fleet of broadcast cars will enhance our operational capability, as well as being very much in tune with ITV’s environmental approach.

“Our ‘Green Team’ meets regularly with a mission to explore and implement environmentally aware solutions and we realized that we didn’t need a ‘Bureau-on-wheels’ anymore. It was a conscious decision to move away from traditional diesel-powered ‘Sat Vans’ over three years ago in favour of something smaller in terms of size and carbon footprint; something more agile, more all-terrain, and generally more fit-for-purpose when it comes to ITV Daytime’s daily Live TV coverage needs.

“In choosing the Mitsubishi PHEV, ITV joins a number of large organisations – such as the Highways Agency, who have opted for the high level of customisation available from Mitsubishi.

“This latest evolution (the ‘Mk2’) of our Broadcast-kit equipped Sat Cars, in collaboration with ‘Team dB’, sees us progress that original theme. Overall, it gets a step closer to our long-term ambition of a fully EV fleet - particularly as battery range and public infrastructure is improved.”