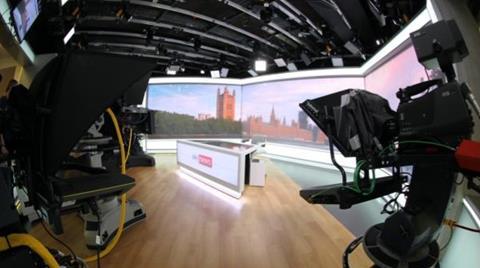 Sky has opened a new Westminster studio for Sky News, which has been created by its in-house advertising wing, Sky Creative Agency (SCA), in collaboration with Jago Design.

The studio space is designed to feel like an extension of other Sky News studios and features a modular desk for a single presenter but that can also cater for a debate with up to four guests in a variety of layouts.

The studio features an LED wall backdrop designed as a window overlooking Westminster with graphic overlay options that work with the automated gallery.

The lighting has been custom-designed to change the feel of the studio and suit the backdrop.

Ben Wickham, head of studio output for Sky News, said: “The relaunch of the studio in Westminster brings a new era of programming to Sky News’ output. It’s been a close-knit collaboration between editorial, creative and technical teams that has been a pleasure to be a part of. It builds on the distinctive look of our existing studios in Sky’s Osterley campus, and the financial heart of the City of London.”