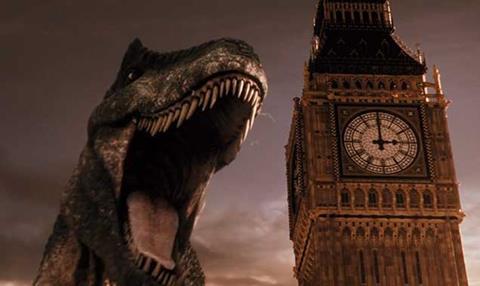 The value of the UK’s VFX industry to the economy has been estimated at more than £1 billion, according to the BFI’s ‘Screen Business’ report, out today.

The report, commissioned by the BFI and created by Olsberg SPI and Nordicity, analyses the economic contribution of film, high-end TV, animation, children’s TV and games to the UK economy. As part of the analysis, it reveals the effect of film, high-end TV and animation tax reliefs on the VFX sector.

“A billion pounds of value for the UK economy is an impressive milestone achievement for the VFX industry.”

It calculates that 13% of film tax relief related spend goes on VFX, 6% of high-end TV tax relief expenditure is on VFX and 1% of animation tax relief spend is for VFX work.

Combined together, and once induced, indirect and spill-over effects are factored in, the measure of the value of VFX for the economy is £773.9million.

On top of this, the VFX spend from commercials production and other creative work including immersive media – none of which is eligible for tax relief – adds a further £235.3million to the pot, says the report.

This brings the total estimated value of VFX to the UK economy to £1.043 billion pounds per year.

“The tax breaks for film and high-end TV have meant massive growth for many VFX companies.”

The report, which is based on data from 2016, also reports that the VFX industry directly employs 8,140 people and supports a total of 17,490 jobs in the ‘extended value chain’.

The UK Screen Alliance was one of the industry partners involved in the creation of the report. Its CEO Neil Hatton said: “A billion pounds of value for the UK economy is an impressive milestone achievement for the VFX industry and this result completely justifies the reduction made in 2014 to the qualification threshold for tax relief that UK Screen Alliance campaigned for, which has allowed productions to qualify on the basis of VFX work alone.”

Lucy Ainsworth-Taylor, managing director of VFX house BlueBolt, which has grown from 25-people nine years ago to in excess of 90 people today, added: “The tax breaks for film and high-end TV have meant massive growth for us and many more VFX companies are now operating due to this opportunity. VFX has become an essential element of the film-making process and the tax reliefs give us the confidence to grow further.“