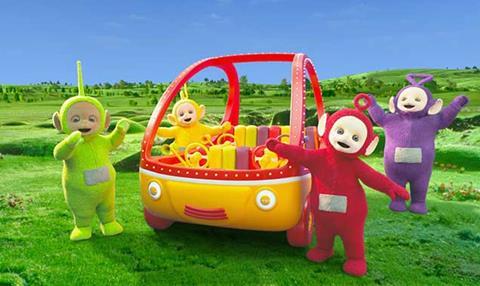 Brief
Create and deliver all the VFX shots across 120 episodes of the much-loved children’s TV series. The team was asked to be true to the original, retaining the show’s distinctive and lovable quality, but update it for today’s pre-schoolers.

How it was done
It was decided very early on in the process to employ a mix of old and new filming techniques throughout, including models, motion control and props, as well as VFX.

In pre-production, the Teletubbies world was created as a CG model so that the VFX team could control the layout of the terrain and test the compositions of the shots with director Jack Jameson and director of photography Simon Reay.

The Lola team approached the work like a VFX-driven mini-series, with each VFX shot given the same attention. Around 30 artists worked on the project for a year.

The shoot took place at Twickenham Studios over a six-month period using blue screen. Three mounds were created for the background environment and arranged in five different layouts that allowed the creation of more than 20 unique backgrounds shot around a circular CG model. All landscapes, including flowers, trees and sky, that are seen beyond the model were created using the Terragen CG tool.

The Prop Shop also created a 3D-printed version of the model background that was almost four metres across and dressed with synthetic grass, laser-cut flowers, individually planted tree stumps and rabbit holes. This ensured accuracy and durability for the long shoot. The model was mounted on a turntable, marked in degrees so it could be turned to face the camera very quickly.

For the more straightforward scenes, the CG model was used to pre-visualise the shot then the practical model was rotated on the turntable to match. The more complicated sweeping moves required blue-screen Teletubbies performances shot with an Ncam System from The VFX Company attached to a crane.

The data was then scaled by 1/20th and checked through the Rig Chase system before being transferred to a Milo motion-control rig and borescope lens to shoot the corresponding model background plates.

The Tubby Car and a hidden playground called the Hidey Hup were added for series two. In the blue-screen studio, a full-sized Tubby Car was mounted on a turntable linked to a Milo Motion Control camera to film it moving around the landscape, allowing the Teletubbies to ride over and around mounds and trees. CG wheels were added.

The VFX supervisor was Rob Harvey and the VFX producer was Victoria Lovejoy, with Helen Bucknall and Dan Lane as the lead animators.

Watch it
Now on CBeebies

Rob Harvey will be discussing ‘Award Winning VFX’ at the Media Production Show on 14 June at 1pm in the Colourist and VFX Theatre.