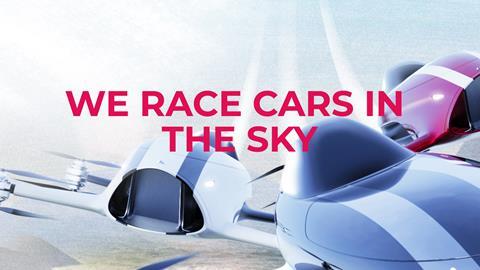 The prototype vehicle gets up in the air, but refuses to come back down again

The motorsport concept, which is being created by Australian company Alauda Racing, suffered something of a setback after the test flight went dramatically out of control.

The vehicles being designed for Airspeeder are variably described as ‘flying cars’ or ‘electric multicopters’, and will race head-to-head at speeds up to 250 km/h around racecourses in the sky.

Alauda Racing founder and CEO Matt Pearson introduced the test flight to an invited audience of press in a venue on the Goodwood estate, adjacent to the Festival of Speed site.

He explained: “We’re developing our performance flying car as a new global sport. Since the age of 15, I’ve wanted to build a flying race car and the technology now means it’s possible. We’ve built a working ¾ scale prototype of the flying race car and have just finished a 4-metre long Mk 4 concept model which I believe is the most exciting vehicle in the world.”

Before launching the working prototype into the sky, Pearson admitted a test flight carried out in private the night before had crashed, and they’d rebuilt the car the night before and “can’t promise a smooth landing.”

Sadly, this ended up being quite a prophetic statement.

The test flight at Goodwood started well, with the unmanned drone-like ‘car’ taking off successfully and sounding very much like a flying race car (see video clip below). It flew around for a minute or so at high-speeds until, suddenly, it hovered at standstill and began climbing into the air. It continued its climb until eventually it disappeared out of sight and out of earshot.

With everyone ushered inside, the vehicle reappeared around 5-10 minutes later, where it dropped at some speed to the ground in a field nearby.

Looking pretty unphased by the incident, Pearson promised “we’ll be back” as he went off to assess the damage.

Alauda Racing hopes to be able to hold the first Airspeeder races sometime next year. Alauda Racing exhibited at Goodwood Festival of Speed as part of the FoS Future Lab, which featured a range of future tech innovators. The tagline of FoS Future Lab is: “Where guests take an awe-inspiring look into the future.”

You can find out more about the Airspeeder sport at http://www.airspeeder.com