“By trying to be not like The Great British Bake Off, it’s ended up a bit of a mess.” 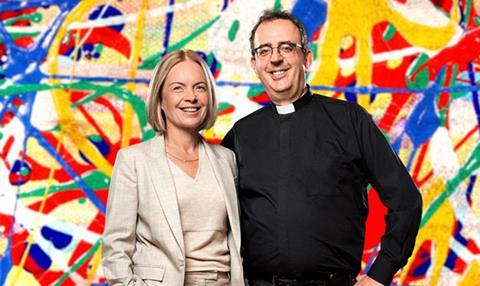 “The painting and the judging I like. Where TBPC fails is in the format. By trying to be not like The Great British Bake Off, with all the extra judges, saying different things, and mentors, and boot camps and what have you, it’s ended up a bit of a mess.”
Sam Wollaston, The Guardian

“What really invigorated the new format, and distinguished it from other Great British Bake Off wannabes, was the notion that instruction is a key part of learning. The result was a refreshingly animated format that cleverly used age-old training techniques to put a new spin on that most clichéd of talent show tropes, the competitors’ journey.”
Gerard O’Donovan, The Telegraph

“It may be a lovely and relaxing hobby, but amateur art is dull to watch. The imposition of a two-hour deadline doesn’t make it any more exciting — it simply makes the results much worse.”
Christopher Stevens, Daily Mail

Terry Pratchett: Back in Black, BBC2

“Having humanised the Grim Reaper in his novels, here Pratchett survived his scythe by being reanimated by the actor Paul Kaye, who so perfected his beard and squeaky lisp that it was often hard to know if it was Terry or Paul whom we were watching.”
Andrew Billen, The Times

“Pratchett gave a number of moving interviews about his condition in the run up to his death. But this tribute, featuring affectionate remembrances from friends, family, former colleagues and fans, was more of a joyful reflection on his life and writings, and the intense bond he forged with his millions of readers.”
Gerard O’Donovan, The Telegraph

“I guess the acid test of a good TV tribute is not whether the fans approve but if it creates new admirers. It would take a hard heart to have witnessed the love and joy on show last night and not want to join in.”
Matt Baylis, Daily Express

“After a marathon catch-up, I actually found myself enjoying last week’s episode. Saturday’s, however, was one of the most turgid, quite a feat given the vivid character acting by Jonathan Pryce, Tom Hollander and Jason Watkins and its stunning visual representation of Regency London.”
Andrew Billen, The Times

“It was almost unwatchable at times, although this was less to do with the viscera than the almost-impenetrable darkness that blanketed so much of the episode. But, dammit, I have to concede that I’m compelled to get to the end of this wildly overlong and self-indulgent, but singularly strange series.”
Gabriel Tate, The Telegraph

“If all the moments of wailing and sweaty hair leave you wincing while you watch, Call The Midwife is rewarding in other ways. It is one of the few dramas to take religion seriously, bringing a welcome touch of Christian morality to the Sunday schedules.”
Christopher Stevens, Daily Mail

“The main story, of a woman forced into surrogacy by poverty, was spot-on and even more so because of everyone’s reactions to it. Meanwhile, a surprisingly successful strain of comedy crept in as Nonnatus House received visits and applications for the new midwife job.”
Matt Baylis, Daily Express