“This is wham-bam, oi, you’re nicked, bright and breezy, just like its location” 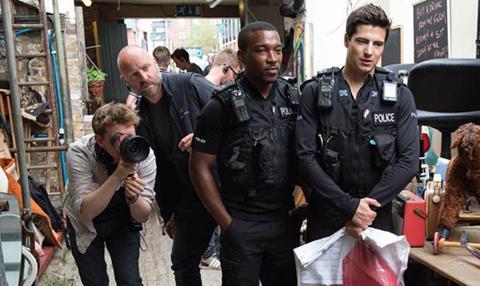 “The crimes were consciously gritty, pushing the limits of pre-9pm viewing. In this we had a self-harming drug addict; a racially-motivated screwdriver attack; child abduction; and suicide. Is this just The Bill for the Instagram generation? Maybe, but that show ran for 27 years, and this is trying to up the ante for depicting modern policing. Time will tell if it makes the grade.”
Sally Newall, The Independent

“A solid, well cast, soundly conceived procedural soap whose relatively novel setting of Brighton lent a welcome vibrancy without quite disguising the familiarity of the fare. Cuffs made the rookie mistake of cramming too many cases into the hour. Still, what lacked in finesse it made up for in pace, only pausing for breath for a montage that cast light on personal lives and closely guarded secrets.”
Gabriel Tate, The Times

“It’s certainly nothing like the current trend for bleak Scandi-style cop shows, in which what’s happening inside a moody detective’s head is as important as the case. This is wham-bam, oi, you’re nicked, bright and breezy, just like its location. Cuffs is a throwback, to The Bill. It’s The Bill-on-Sea, Selsey Bill, if it was a little to the west. It’s The Bill brought not just to the south coast but also to the 21st century, with welcome diversity and parkour.”
Sam Wollaston, The Guardian

“It’s too early to say whether Cuffs will find a way to endure like The Bill or engage like Inspectors Morse and Gently. In truth, it’s a different kind of show: an ensemble piece with an pre-watershed time-slot (8pm) meaning grittiness and violence are kept to a minimum. Given the decent performances (particularly from Walters and the always likable Amanda Abbington), it’s probably worth sticking with.”
Phil Harrison, The Telegraph

“We’ve moved on in time but back in space, to take in more, from more points of view, the expanding shockwaves, as well as a lovely new Hudson riverside location. Still just as seductive, maybe even more so. Back on then.”
Sam Wollaston, The Guardian

“The introduction of two further viewpoints and to more timelines should have been disastrous. Yet last night’s double bill reignited The Affair. The performances – and the sex scenes – were again so raw that to watch them felt voyeuristic, whichever side of the story we were seeing. Everyone was monstrous, yet the format granted their behaviour the context to save it from caricature. At its best – and this was close to it – The Affair is mesmerising: emotional rubbernecking of the highest order.”
Gabriel Tate, The Times

“This is supremely grown-up drama which tackles adult themes in a proudly demanding way. Sometimes it’s hard not to wish The Affair wasn’t so deeply in thrall to its own central conceit. The rest of the time, you wouldn’t want it any other way.”
Phil Harrison, The Telegraph

“Nailing, in the colloquial sense of the word, is a recurring theme of this cleverly-scripted series populated with complex characters who speak, fight and have sex like real people. It’s sweary, messy stuff, and God, it’s compelling.”
Sally Newall, The Independent