TV Critics: The Young Pope; For The Love Of Dogs; The Fall

“The Young Pope defies all rational description. However bad you imagine it could be, it’s immeasurably worse.” 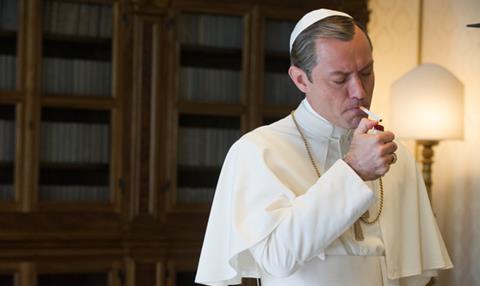 “Rejoice! For all fans of lavish, lurid telly gibberish who have been inconsolable since the end of the ridiculous Versailles, there’s a towering new confection of dreadfulness on our screens. The Young Pope defies all rational description. However bad you imagine it could be, it’s immeasurably worse.”
Christopher Stevens, Daily Mail

“The Young Pope feels like the most sumptuous series ever shot. The costume budget alone would cover an entire British cop drama. But overall, despite flinty thinking about power and faith, the sensation is of being tranquillised by wafts of incense.”
Jasper Rees, The Telegraph

“It’s a lacerating performance from Jude Law – his young pope is brutally calculating, occasionally almost charming and never less than terrifying. Seeing him eviscerate, in casual, leisurely fashion, anyone who fails to serve his needs is to watch the devil at work.”
Lucy Mangan, The Guardian

“Recruiting Law is one of several fine decisions that Paolo Sorrentino, the Oscar-winning Italian film director, has made on his strange and satisfying move to the small screen. Law has been disappointing in lead roles, his best film performances coming as supporting characters. Yet here he luxuriated in the limelight. He reminded me of a mafia don.”
Ed Potton , The Times

Paul O’Grady: For The Love Of Dogs, ITV

“This is television that warms your heart, for the price of a handful of biscuits. Every time I watch this show, it makes me feel better. It’s not just the lovable dogs — it’s Paul’s unfeigned joy, as he gets another slobbery cuddle from a new friend.”
Christopher Stevens, Daily Mail

“Love, you suspect, matters more than acres and this show is full of it. I’m not sure I’d have been such a fan before I acquired my own miniature schnauzer a year ago but that’s the love of dogs for you.”
Matt Baylis, Daily Express

“We’re now at the penultimate episode of the third series of The Fall. I’m enjoying it greatly. The fact that we are five hours in out of six and nothing has actually happened yet is a minor concern, but at least this time I care what the ending will be and may even be able to decipher the necessary explanations along the way.”
Lucy Mangan, The Guardian