100 Foot Wave; The Great British Bake Off; In My Skin; What We Do In The Shadows; Stath Lets Flats

“Surfing is presented here as a curious harmony of ego and respect; an extreme communion with Mother Nature” 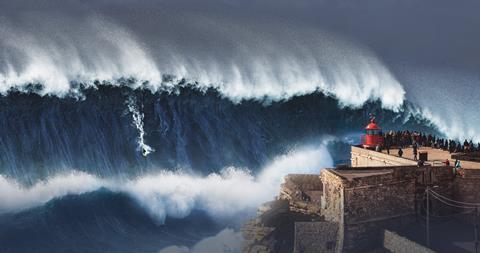 “The series is replete with images of the sea as a place of terrible beauty, even as things meander, a touch discursively, through the thoughts of other Nazare daredevils. It is at its best when focusing on McNamara and the relationship between surfer and place…So far it could be argued the series doesn’t provide much deeper behavioural context, but perhaps there isn’t really one. If you’ve grown up surfing it’s just in your blood. Big-wave surfing is presented here as a curious harmony of ego and respect; an extreme communion with Mother Nature.”
James Jackson, The Times

”The Great British Bake Off (C4) have been sky-high throughout. As we reached the quarter finals, that was beginning to make things awkward…the best Bake Off series are the ones where disaster can strike any of the erratic amateurs, leaving us guessing until the end…I’m sure that, in 2015, even the producers didn’t know if Nadiya Hussain would reach the finish line without succumbing to self-doubt. The whole country was willing her to win but the result was always on a breadknife-edge. This year, by contrast, Paul has all but admitted that Jurgen and Giuseppe are too good to be ousted for a single bad performance…For me, vintage viewing demands the possibility of catastrophe. We don’t get that from Jurgen and co. Presenter Noel Fielding has his own ideas about what he’d like to see.”
Christopher Stevens, Daily Mail

“Quarter-finals on a major reality show should be brimming with tension. But Bake Off has always shied away from conflict. So though the possibility of elimination loomed throughout, the competitors were more concerned with doing themselves justice than dodging the chop. It made for a delicious 75 minutes of escapism. And it was a reminder that, after more than a decade on the airwaves, Bake Off has yet to lose that oven feeling.”
Ed Power, The i

“When things are good, it is a cheeky portrait of teenage life and school days. The romance between Bethan and Cam is handled with a light touch and is almost painfully sweet and sincere. The banter that passes between the kids is excruciatingly familiar…But as the series unfolds, it becomes clear that the path to leaving home is not as smooth for her as it might be for some. In a show where most of the characters are trying to escape from something, circumstances set different barriers for each of them, and some seem insurmountable.In My Skin is filled with empathy, which makes it easy to care deeply about what happens to everyone in it…It knows how to tell a story concisely, packing its short instalments with crucial events, traversing emotional highs and lows, but never seeming bloated.”
Rebecca Nicholson, The Guardian

What We Do In The Shadows, BBC1

“Although the jokes veer from the arcane to the scatological, the pace of the show is so fast that it’s easy to pick out the ones that make you laugh and skate over the rest…That’s a send-up of J.K. Rowling’s brand of magic, and it gave Nadja (Natasia Demetriou) the chance of a hilariously filthy gag — one that would make Harry Potter blush to the tips of his spectacles.”
Christopher Stevens, Daily Mail

“This riotous sitcom about a Greek-Cypriot lettings agent (Jamie Demetriou, also the writer) negotiating life in north London has carved a niche as a sort of anti-Fleabag. It isn’t in the least arch or witty – and has nothing to say about millennial angst or 21st-century gender dynamics. Instead it’s anarchic, nonsensical and reliably hilarious. If a comedy comparison came to mind it was Dumb and Dumber and the school of 90s chucklefests that prioritised rapid-fire gags over character development… Yet the absurdity was in service of 30 minutes of unpretentious, frills-free comedy.”
Ed Power, The i