Walking With Kate Garraway; Animal; Between the Covers; The Tower; Life & Rhymes

“A gorgeous programme, visually, aurally, philosophically, and benefited from being unscripted” 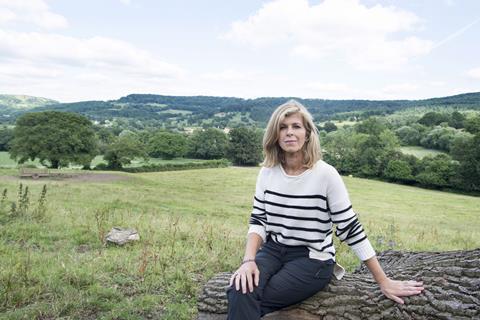 “This was a gorgeous programme, visually, aurally, philosophically, and benefited from being unscripted… In a meditative half-hour she narrated the landscape and said she felt inner peace.At the 12th-century church, when she closed her eyes in prayer, in different hands it could have looked corny. But in hers it was extremely moving because we knew what she was praying for… This was balm for the soul, for the viewer and, hopefully, for Garraway. Lord knows she’s earned it.”
Carol Midgley, The Times

“Hey, Mr GMB man, play a song for me, in the jingle-jangle morning on breakfast TV. Love, peace and phone-in competitions, all right, yeah.No one knew, but Kate Garraway is a bit of a hippy…Solo meditations on country walks have been a popular feature on Radio 4 for years. BBC2 discovered the format a few months ago, sending Chris Packham on a riverside stroll as lockdown lifted, and now a whole series of celebrity rambles is scheduled.”
Christopher Stevens, Daily Mail

“It is not clear to me what Animal adds to our understanding of the natural world, besides having celebrities do the voiceovers (a mixed blessing, as sometimes the narration is so flat that it feels as if they literally phoned it in). That said, I quite like Rebel Wilson narrating two male koalas brawling over a female in a tree, and dog-loving Bryan Cranston explaining the hunting strategies of canine packs as if we are Jesse Pinkman and he Walter White, meticulously lecturing on how to cook pure meth. David Attenborough needn’t feel his day job is under threat, though.”
Stuart Jeffries, The Guardian

“Most people already know that a tiger’s markings can help it hide in long grass and that in a pride of lions, it’s the females who are sent out to hunt. But who cares when the scenes are so arrestingly gorgeous? To a British ear, Rashida Jones’ American accent Disney-fied the episode a little, but it was brought back from the brink of sweetness by the very real images of life as a big cat, whether mating, scent spraying or tearing into a buffalo’s neck nose-first.”
Emily Baker, The i

Between the Covers, BBC2

“It didn’t appeal at all. It’s so lightweight that one of the discussions instigated by host Sara Cox was about whether the assembled guests marked a page by turning over a corner or using a bookmark. All of these “discussions” flashed by in five minutes. It all has the feel of a daytime magazine show manically condensed into half an hour. As an example of how things should be done, can I point BBC Two executives to Open Book on Radio 4, in which Elizabeth Day treats books and authors with the respect they deserve.”
Anita Singh, The Telegraph

“Its finale had some surprises up its sleeve so, mercifully, we were spared the leaden “saw it coming a mile off” predictability you get with most cop shows. It tried, with some success, to show that life isn’t always black and white and that human beings can do bad things, but it doesn’t necessarily make them all bad.At this point it got rather sermony (it’s so much better when dramas show not tell), but fair play to it for showing life in all its complexity.”
Carol Midgley, The Times

“Everyone seems to be having a lovely time. It’s more adventurous and thought-provoking than BBC Two’s woeful books programme. But the quality of the poets is, shall we say, variable. Bex Gordon was the standout with Schtum, a poem about her sister, an adult with severe disabilities…It laid out the stark reality, and was one of the most powerful things I’ve heard in ages. But at the other end of the spectrum we had Henry Beckwith, whose jokey, Victoria Wood-style singalong told of being terrified to come out to his family…was a sitcom gag. With material like this, he should be plying his wares on the stand-up circuit instead. ”
Anita Singh, The Telegraph