”The concept is decent and with a few tweaks could work.” 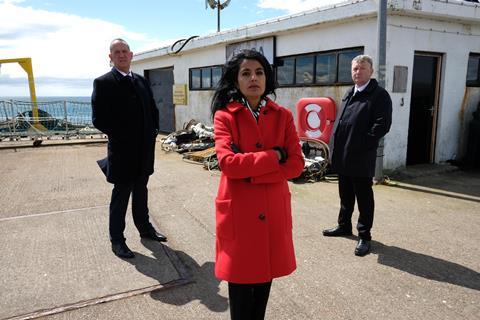 “If a whole episode had been devoted to setting up the case, Murder Island would have me hooked. But, that aside, this is a cleverly constructed mystery — much better than the format of the show deserves. Writer Ian Rankin, creator of the Edinburgh sleuth John Rebus, has devised a crime with multiple suspects.”
Daily Mail, Christopher Stevens

“If the idea is sound enough the execution is a mess, and much of this is because the producers failed to heed the warnings of The Murder Game. That series was fun but quickly tied itself in knots. It was a cross-breed of game show, reality show (with elimination vote), murder mystery and purported genuine investigation. But in trying to offer something for everyone it gave nothing to most.”
Benji Wilson, The Telegraph

“These amateur dramatics made this show feel ridiculous and, at times, entirely forced. The concept of Murder Island is decent and with a few tweaks could work. But like a game of Cluedo, this episode got boring quickly. It seems the producers have forgotten one vital rule: television drama rarely mirrors the real-life drudgery of a murder investigation.”
Emily Baker, The i

“The goal of all hybrid genres is to double the value of watching. On most occasions, however, it simply halves it because neither contribution is fully developed and each undercuts the other’s momentum. Murder Island, judged on the first episode, falls into the latter camp. Things may improve as teams are eliminated, allowing the hour to tighten up. It will help, too, if the interactions between the detectives and the actors become less stagey and awkward as they relax into the situation and its strange demands.”
Lucy Mangan, The i

“The snag was that it often felt as if candidates for The Apprentice had turned up in the wrong series — Vera or Shetland — finding themselves wearing forensic Hazmat suits rather than Burton ones. OK, they aren’t irksome like Lord Sugar’s braying berks, but the comparison was fuelled by having them report to a stern real-life officer (“You will address me as ‘ma’am’!”) and her two watchful sidekicks. So while their inexpert investigations revealed a thing or two about how hard homicide work actually is, such reality trimmings tended to work against the creation of proper crime-mystery tension.”
James Jackson, The Times

“Dementia & Us did its best to show some love and laughter amid the pain and sadness, it sailed a brutal course – dementia is a descent and no one can defy its gravity. One thing the series did well was to show how “dementia” is itself an umbrella term, a different experience for everyone depending on the type and the part of the brain it damages.
Benji Wilson, The Telegraph

“This careful and searingly honest film served as a reminder that dementia is not a one-size-fits-all condition.”
Emily Baker, The i

“Yet this was a first episode defined by what Gilly’s wife, Christine, pointed out: “There is a lot of pain. But there is also a lot of love and laughter. So take the positives.” For far too many people, the series will be essential viewing.”
James Jackson, The Times

“If this season happens to be more frenetic than the last, it is also uproariously funny, painful and delightful in its skewering of this family, faithful in its continued adherence to each character’s design. .”
Philippa Snow, The Independent

“It’s a clever series, which, in its own, subtle way, flexes its muscles against the imitators. Succession has become known for opulence – the filthy rich and their exotic lives – but anyone can do opulence. James Bond films can do opulence, Bridgerton can do opulence. Heck, even an ITV Sunday-night drama can stretch towards something that looks like opulence.  But Succession is about power. And the real power is behind the scenes, not in the ballroom.”
Chris Bennion.The Telegraph