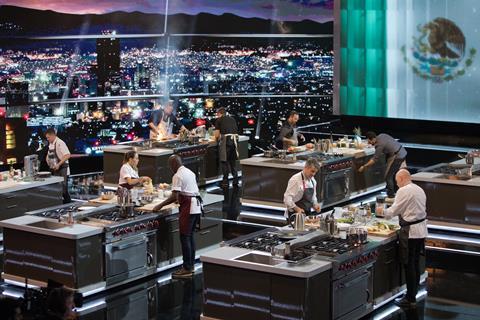 “Imagine a cooking programme so bombastic it makes Gordon Ramsay’s latest look like Lark Rise to Candleford. Imagine a programme so devoid of subtlety or nuance that it makes you long for the piercing insights of Greg Wallace and John Torode from MasterChef. Now imagine David Tennant with all the charisma squeezed out of him and replaced with a single terrified expression suggesting Davros is bearing down on him. That is Andrew Knowlton. He is your host and the programme is The Final Table.”
Lucy Mangan, The Guardian

“Netflix’s The Final Table is MasterChef: The Professionals filmed on a forecourt in the Death Star, incidental music rumbling away as if the Empire is gearing up for a rebel attack. Despite all the ‘ultimate global contest’ hot air, it’s still like watching a shiny American show with a slick, Ryan Seacrest-y host. In fact, The Final Table is really quite entertaining if you don’t mind the bombast.”
James Jackson, The Times

“Particularly striking was the way it pitched you right there on the crash scene through the replaying of police bodycam footage. The confusion of one of the surviving lads, dazed with shock, felt almost close to intrusiveness — except it was clear that lies were being told about who was driving. If the film slightly took its time following the case, true-crime style, to reveal the real culprit, you were never allowed to forget the terrible waste of life.”
James Jackson, The Times

“As police and other emergency services increasingly open themselves up to scrutiny on screen, film-makers must take extra precautions not to treat tragedy as callous entertainment. Car Crash: Who’s Lying? drifted over that boundary. It treated the death of a 19-year-old boy as fair game for a real-life whodunnit. Such drawn-out, fake tension belongs at the climax of Bake Off, not in a true investigation of how an innocent boy lost his life.”
Christopher Stevens, Daily Mail

“Though it sometimes lacks depth, this show is entertaining without being manipulative. And it cannot fail to leave viewers with an increased respect for our police.”
Christopher Stevens, Daily Mail