A comprehensive survey of the facilities and kit used to post produce some of the UK’s highest-rating shows. 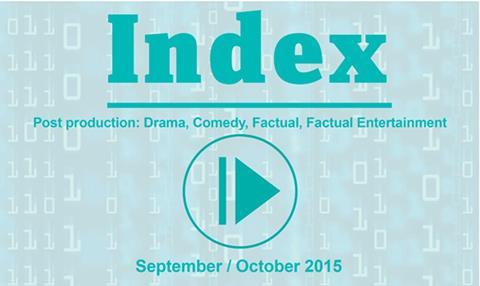 The aim of our Index survey was to provide a view of the UK post-production industry by using content as the starting point, so that the focus is squarely on the facilities that are responsible for helping to create the UK’s most popular programmes.

By using the highest-rating shows as the basis for this survey, rather than metrics that measure the size of a company, we have been able to draw in smaller facilities that could be overlooked, despite being responsible for some of the UK’s greatest shows. That, in turn, has allowed us to build a picture of the key technology that is used to craft and polish programmes.

Index is broad in scope, but doesn’t claim to be all-encompassing. For example, because the most-watched programmes are dominated by terrestrial channels there are no Sky, Netflix or Amazon shows and, because they don’t rate as well as other factual shows, fixed-rig programmes are absent.

But with Index set to become a regular feature in Broadcast TECH, these areas will be tackled in future issues. Other genres, including entertainment and live events will be examined, and the distinct categories of the offline edit and VFX will also be surveyed as standalone subjects using the same approach of focusing on popular content, the facilities responsible and they kit used.

Factual Post houses need to be flexible in factual

Methodology
This survey of 120 of the UK’s highest-rating programmes by consolidated viewing figures that transmitted between 1 July, 2014 and 30 June, 2015 has been split into four genres: drama, comedy, factual and factual entertainment.

For drama, we selected single-episode, serials and returning dramas. Comedy shows were included on the basis of being scripted programmes. Live programmes, or those with a significant live element, along with regional opts have not been included in this survey.

Information relating to equipment has been sourced from production companies, post-production facilities and craft talent.

Post-production work has been credited to the facility or individual holding the relationship with the production company responsible for the programme. Every effort has been made to ensure the information contained in this survey is accurate and fair.

Media organisations and creative professionals use Avid solutions to create the most listened to, watched and loved media in the world - from prestigious award-winning feature films, to popular television, news programmes and televised sporting events, as well as today’s most celebrated music recordings and live concerts.