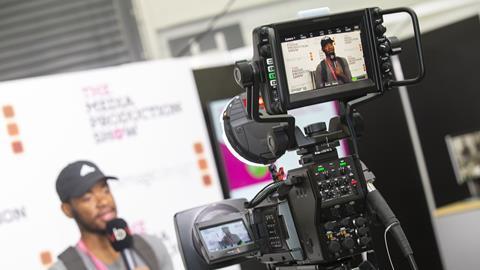 Panasonic is set to demonstrate its latest innovations in professional camera solutions at this year’s Media Production Show. It will showcase technology that varies from 4K production cameras approved to capture Netflix Original series to remote camera systems used to bring workflow efficiencies to sport, studio and live production.

Situated in the production area of the stand will be EVA1 Ambassador Rupert Cobb, who will be available to show attendees a range of footage shot on both the EVA1 and VariCam LT, as well as showcasing the ease of the cameras’ workflows through a demonstration of editing and grading content in DaVinci Resolve.

Shows shot using the cameras include Ricky Gervais’s Netflix Original dark comedy After Life and the latest series of Discovery’s Deadliest Catch, which was captured using a total of seven VariCam LTs and 17 EVA1s.

Panasonic’s products have been used to bring audiences to the heart of the action when it comes to live-event capture. A key example of this was Disney’s Broadway Hits at the Royal Albert Hall, where an LUT was provided to colour-match the 13 VariCam LTs, two UC3000 live system cameras and five UE70 4K PTZs.

Creative Technology – part of NEP Group – has also been widely using both the UC3000 and UC4000 on major tours of performing artists, corporate shoots and for e-sports, demonstrating the wide appeal of these camera systems.

The use of live video has grown in recent years, fuelled by the launch of YouTube Live and Facebook Live. This content can be anything from a live product launch to a behind-the- scenes viewpoint or breaking news, and with this comes the requirement for high-quality video to enhance interaction.

The CX350 is equipped with an RTMP/RTSP function for live streaming and is the first camcorder to support NDI|HX, allowing both video transmission and camera control via IP, so it can be used alongside PTZs with ease.

Holdan’s new Vitec CS production workflows, which debuted at this year’s NAB, will get their European debut at the Media Production Show.

Holdan has a new trick up its sleeve for its new Cine 7 range of on-camera monitors. As well as supporting 100% of the P3 colour space and offering 1800 NIT brightness, it provides Arri camera control (Sony and Red follow soon).

The Cine 7 range is also available with a built-in Teradek wireless video transmitter or receiver, which is compatible with the new Teradek ACE 500 low-latency transmitter. Compact and cost-effective, the ACE is ideal for monitoring, focus pulling and client screens. Ace 500 will also debut at MPS 2019.

Paired with any SmallHD monitor running OS3, CTRL.3 displays critical lens data as overlays directly on the monitor, allowing camera assistants to pull focus and keep eyes on the image. The new controller will be shown in conjunction with the latest MDR.X 3-axis receiver and MOTR.X lens motors on Holdan’s stand.

The exhibition is free to attend - register for your badge at www.mediaproductionshow.com