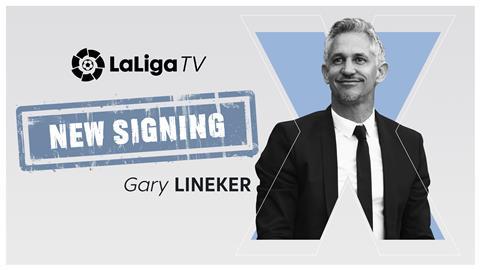 Gary Lineker will join the on-air talent line-up for LaLigaTV next season.

Earlier this year the presenter had announced that he would no longer front BT Sport’s Champions League coverage after six seasons doing so, as he wanted to follow his club, Leicester City, through its campaign in the competition.

Presumably his work on LaLigaTV won’t conflict with that hope, or his continuing work presenting Match Of The Day for the BBC. He will present key fixtures for LaLigaTV, as well as and feature regularly on the VIVA LaLiga studio programme, which is broadcast live from Barcelona. He will also complete LaLiga-related promotional duties.

Lineker, who played in LaLiga for three years at Barcelona, said of the news: “I’m thrilled to become a part of LaLigaTV, a channel I’ve watched every weekend for the last two seasons. I have fond memories of my time playing in Spain and very much look forward to sharing the excitement of LaLiga with viewers in the UK and elsewhere.”t

Melcior Soler, audiovisual director at LaLiga, continued: “Adding Gary Lineker to our talent pool is really exciting for LaLiga fans. He has a vast portfolio of presenting experience and an in-depth knowledge of Spanish football. We look forward to witnessing the expertise, energy and passion he will bring to LaLigaTV.”

LaLiga kicks off at 8pm on 13 August this year, with Valencia v Getafe.