NAB 2015: Canon has unveiled a 4K version of its popular C300 camera and launched a new compact 4K device. 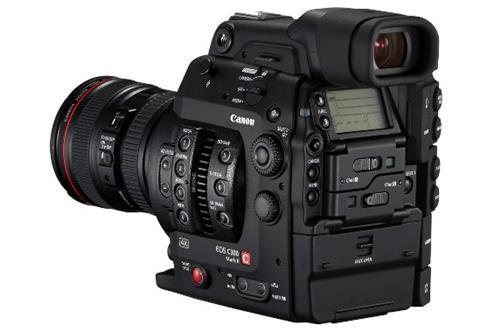 And it has added to its range of 4K reference monitors with the DP-V2410, which has been designed for use on-set or on-location in broadcast and cinema productions.

Canon described the MKII, which will be available from September for £11,299, as a more rugged device than its predecessor which was launched in 2011.

Canon said a new Super 35mm CMOS sensor and an increased ISO range up to ISO 102,400 would deliver “exceptional” low light performance, and that the camera’s sensor read-out speed is twice as fast as the original EOS C300 which would help to reduce rolling shutter distortion.

The camera is also the first Cinema EOS model to feature new Canon Log2 technology, which enables the 15-stops of dynamic range, which Canon said is significantly wider than previous Cinema EOS cameras.

It also supports four-channel audio recording in 16 or 24 bit and 48 kHz.

Canon’s new XF-AVC H.264 codecs have been designed to be compatible with standard non-linear edit systems. The range features XF-AVC intra for 4K, and XF-AVC Long GOP and Proxy options for 2K/Full HD recording, both of which utilise the H.264 codec.

C300 MKII users will be able to select the resolution and codec type that best suits their production, with the EOS C300 Mark II capable of shooting at up to 30P in 4K or up to 120P in 2K/Full HD.

The XC10 is described as a “compact and lightweight” video and stills camera that has inherited some of the Cinema EOS range’s features.

Available from June for £1599, the XC10 has a DSLR-esque form factor and is targeted at independent film makers or for use as a B-camera in larger productions.

A rotating grip supports a range of shooting styles and it includes an adjustable 7.66cm touchscreen LCD.

The XC10 is wi-fi compatible, enabling remote control of key features via a browser, smartphone or tablet.

The DP-V2410 is equipped with 3G/HD-SDI and HDMI interfaces, plus a built-in debayer, and is able to show native 4K RAW footage direct from compatible Cinema EOS cameras.

Monitoring functions including a 4K-capable wave form monitor and vectorscope and the monitor includes 1D/3D-LUTs and an audio level meter.

The DP-V2410 is expected to be available in Europe in Q4.