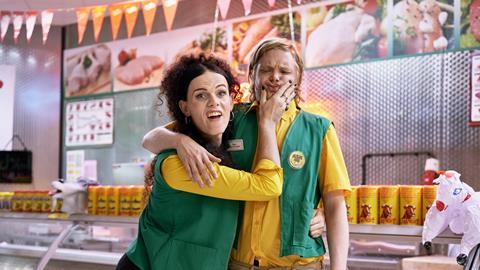 ‘It feels new, fresh and funny’

Helmed by an all-women team, Transaction follows narcissist Liv (Gray) and long-suffering friend and supervisor Tom (Thomas Gray) as they work the nightshift at a national supermarket. The £135,000-per-episode series has so far recorded 2.4 million views, with average episode views of 400,000 – smashing KPIs by 20% and 300% respectively.

Transaction has contributed to Comedy Central becoming the 16th biggest entertainment brand in the UK on Facebook, achieving more monthly views on the platform than BBC Comedy and Dave.

With Transaction, Comedy Central also achieved its objective of testing ideas and talent for linear development before commissioning a long-form scripted series.

One Broadcast Digital Awards judge praised Jordan as “a great lead character” and said the series was “timely”. Another added: “It feels new, fresh and funny. It’s brilliantly bold and tackles issues with humour. Jordan is a great talent and I want to watch more.”