The development team at Monkey Kingdom created The Question Jury after watching the 1950s film Twelve Angry Men, in which a group of strangers are stuck in a jury room together, leading to much drama and debate. 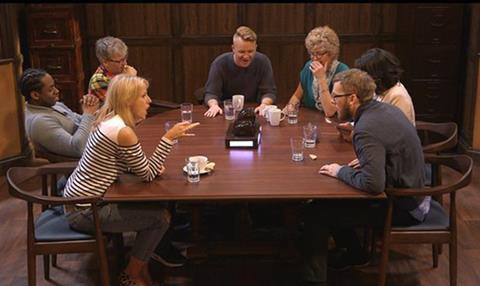 In Channel 4’s show, seven jurors entered a room that they were unable to leave until they had answered a series of questions – worth varying amounts of money.

The claustrophobic environment created organic drama. Indeed, Monkey Kingdom pitched the project as “a quiz show, shot like a drama, with a soap opera storyline”.

The main challenge for the team was to keep the quiz element simple and compelling, with build and climax, while striking the right balance between the quiz and reality scenes.

The judges were united in their praise for the format, calling it “a real turn of the dial in daytime” that “seamlessly blended reality”. It was “an exciting, dramatic daytime format”, they said, “well cast, with strong format points and a great use of the rig”.

The 20 x 45-minute series, which was stripped across four weeks, picked up a consolidated series average of 237,000 (3%) and was consistently in the top five of Channel 4’s most tweeted-about shows, coming as high as fourth in the UK’s top 10 trending topics.

After Sir Cliff Richard won his two-year battle to clear his name, ITV Daytime was first on the scene to hook the worldwide exclusive TV interview. The one-off special took the show out of the studio, with a consolidated 1.1 million (16%) tuning in – the show’s highest viewing figures since 2014.

MONEY FOR NOTHING
Friel Kean Films for BBC One

Born out of a BBC Glasgow briefing day, this daytime format was Friel Kean’s first ever formatted commission. As a growing audience watched the beautiful and valuable renovations unfold, it landed a recommission before the run had finished.

A NEW LIFE IN THE SUN
True North for Channel 4

A New Life In The Sun was the first pure ob doc series in Channel 4’s 4pm slot and was the first time True North had embarked on such a large-scale series based aboard. During the course of filming, C4 ordered an extra five shows, followed up by a full second series commission shortly after transmission.

PICK ME!
Possessed for ITV

Completely improvised by an audience of 200 potential contestants, Pick Me! was a daytime show with a warm Saturday night studio feel. It racked up 45,000 tweets over its run and is now set to move into a primetime slot.

SISTER RITA TO THE RESCUE
BBC Studios for BBC One

This stripped, formatted ob doc series followed the mission of Sister Rita Lee as she transformed the lives of residents in one of the poorest areas of Manchester. Sister Rita To The Rescue has been praised for illustrating individual struggles across the UK. A second series is now in production.