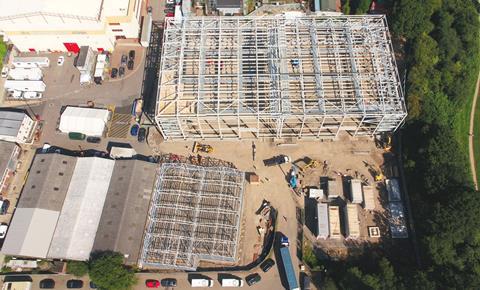 Elstree Studios has revealed the name of its new soundstages, which was chosen from one of the suggestions received in a naming competition run by the studios.

The competition received 400+ suggestions of names, which were inspired by icons of the silver screen and leading lights in the TV and film industry, honoured local heroes, or were based on filmic references to screen classics such as Star Wars, Big Brother and Kubrick’s 2001: A Space Odyssey, that were produced on-site at Elstree.

The winning entry was Platinum Stages, which was submitted by Matt Payne of London and chosen by the Board of Directors of Elstree Studios and the Mayor of Hertsmere, Councillor Anne Swerling.

Payne now receives two VIP passes to the launch of the new soundstages next spring, a tour of the studios and lunch at the on-site Rushes restaurant. He will also receive an Elstree Studios hoodie, goodie bag and range of merchandise.

Councillor Morris Bright MBE, leader of the council and chairman of the Elstree Studios board, said: “We had some really quite imaginative and very note-worthy suggestions. Among those shortlisted were The Skywalker Stages, Kubrick’s Overlook Stages, The Paul Welsh Stages, in honour of one of our foremost studio champions, and The Centenary Stages, in recognition of the studios’ near 100-year history.

“The reason the board and Mayor of Hertsmere chose Platinum is because it works on so many levels. Obviously, platinum has connotations of high value and exclusivity, which aligns perfectly with the cutting-edge technology and state-of-the-art specifications of this facility.

“But it’s also appropriate because the Queen’s Platinum Jubilee is taking place next year, just when these new soundstages will be opening. This auspicious occasion will be a moment for the whole nation to come together and celebrate all that has been and all that is to come for the country.

Cllr Swerling added: “I want to thank everyone who took the time to submit their entry to our competition. We were delighted with and quite overwhelmed by the sheer number of entries received. It really is testimony to the genuine public affection out there for Elstree Studios and Hertsmere.

Work to build the Platinum Stages began earlier this year and is set to finish in spring next year. Once operational, the facility will create at least 800 new jobs, plus apprenticeship and other learning opportunities for local school leavers and the unemployed.

The £15.6 million project has been part-funded by Hertsmere Borough Council and the government’s Getting Building Fund via the Hertfordshire Local Enterprise Partnership.