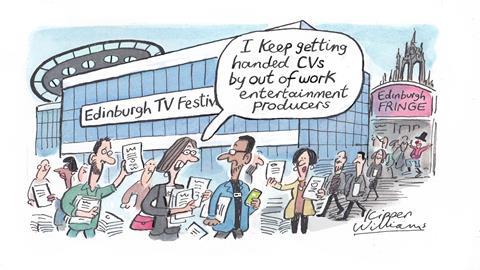 The king of TV genres has lost its crown but may have a new champion, says Steven D Wright

As TV types know, late August is all about Edinburgh but, thankfully, this year I am stuck in a sweaty edit suite in Soho polishing a turd/crafting TV gold (it’s too early to call it yet).

It has been such a nice change and allowed me to forget the tartan-clad tourists and zany performers crowding the Royal Mile and sticking a flyer in my hand every five seconds.

But I did miss one thing: the non-stop entertainment and laughs. Not laughter generated by the comedy at the Pleasance Courtyard but from watching haughty commissioners being forced to climb down off their pedestals and mingle with ambitious APs, junior researchers and the like at the TV festival. They hate that.

Despite the live acts, liver damage and late-nights chips and sauce, Edinburgh is properly entertaining – which is more than you can say for our TV channels at the moment.

Everywhere you look, entertainment is missing – and I’m not just talking about the ‘silly season’ slump where sly schedulers slip out their worst shows of the year hoping no one will notice.

Even on Saturday nights, there don’t seem to be any new entertainment shows to fill the gap until Strictly returns. Without Craig Revel Horwood throwing shade, a cursory look at a cool channel like BBC3 reveals loads of documentaries and the odd killer comedy but no new entertainment formats. Same again on BBC2 – everything feels serious, worthy and a bit grown-up.

Somehow it all feels a bit po-faced when all you want is to be cheered up of an evening.

Recently, the most chucklesome show on BBC2 was Bob Mortimer and Paul Whitehouse talking about death while coarse fishing – which, although lovely and lyrical, was more a comedic essay on ageing and mortality than hardcore entertainment.

Of course, it wasn’t always like this. Entertainment used to be the king of TV genres – it ruled primetime. Wherever you looked, late night, daytime or early morning, gasps and fun formats were all the entertainment commissioners wanted.

But somehow, in the rush to emulate Netflix, Amazon and HBO, high-end dramas, cinematic docs and expensive comedies have become more important and all those poor old entertainment producers have been abandoned and forgotten.

I can’t be the only viewer who is weary of yet another underwhelming long-running drama. When all you want is a bit of fun, starting a new 10-part epic serial feels like hard work and a massive investment of time and energy, which I rarely have these days (at this point, I usually flick onto a repeat of Kath & Kim for shits and giggles).

Ironically, although I usually blame Netflix at this point in my column, the SVoD service has suddenly revealed it is going big on entertainment formats.

Netflix’s next big show is Flinch – a mega-bucks, mega-sized format from Stellify Media in which contestants are scared, tortured and teased to see how far they’ll go. It was commissioned by Brandon Riegg, a man whose team also greenlit Nailed It! and the reboot of Queer Eye, and whose back catalogue encompasses classics like Dancing With The Stars and Wipeout.

Riegg, whose keynote speech in Edinburgh last week was surprisingly well received, could make the entire industry flinch if he continues to aid a rebirth of old-fashioned entertainment (and hopefully cause a rush of copycat commissions on all the channels). Now that really would be entertaining. 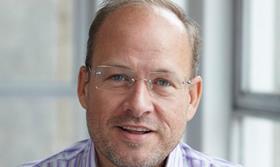