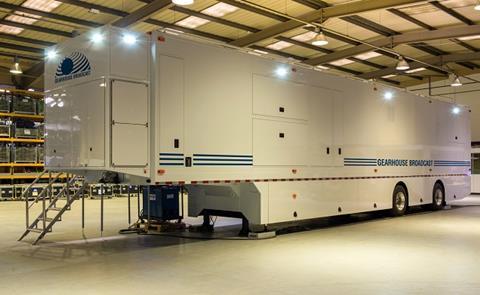 Described as “the first mobile unit based in the US to feature a full 4K monitor wall, ‘one button’ hydraulic deployment and integrated RF”, it will be used to support 4K/UHD sports and entertainment productions.

“Columbus was developed with the current and emerging needs of the US market in mind, based on our experience here as well as from what we have learned with advanced mobile units in Australia,” said Gearhouse Broadcast chief executive and founder John Newton.

The mobile unit is IP-ready and equipped with 24 Boland 4K monitors in the main control room monitor wall driven either as quad splits or single input 4K monitors from the main router.

It also features 16 Sony HDC-4300 4K/HD cameras with the capability to add an additional six RF cameras or a further four Sony HDC-4300s.

Hitachi SK-HD1200 camera systems will be deployed for applications outside of 4K.

It is equipped with a Grass Valley Karrera K-Frame S-series switcher along with four 12-channel EVS ChannelMAX live-production servers.

An Imagine Communications Platinum IP3 router is supported by a Lawo VSM control and monitoring platform.

Audio is supported via a Lawo mc256 64 fader mixer and communications are managed using the new RTS Adam matrix intercom.