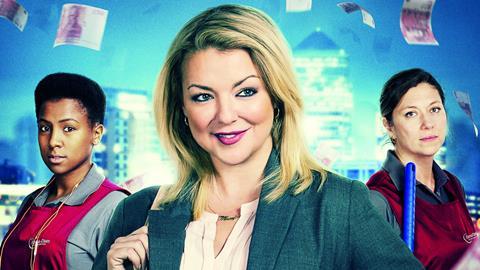 Two worlds collide in Cleaning Up: the world of the traders who work in the glittering towers of finance, and the one inhabited by the people who clean them.

In Jane Featherstone’s debut ITV drama under her Sister Pictures label, the corrupt world of insider trading meets its match in Sheridan Smith, who plays a working-class mother who stakes everything on the unpredictable stock market.

Created by screenwriting newcomer Mark Marlow, Cleaning Up follows the story of Sam, a cleaning lady and devoted mother who struggles to keep her family together after becoming addicted to online gambling.

After discovering she has access to lucrative stock market information in the building she cleans, Sam attempts to navigate the dangerous world of insider trading.

Shot on location, the drama juxtaposes the high-rise towers of Canary Wharf with the low-rise estates of the Isle of Dogs. ITV Studios Global Entertainment director of global content Julie Meldal-Johnsen says the setting is crucial:

“The gleaming towers of finance hovering over people who are trying to make ends meet feels universal. It taps into people’s dreams and ambitions.”

The series, which melds crime, comedy and character drama, is buoyed by the “brilliance” of Smith, says Featherstone. “It’s a piece about our time and the inequality in our world – but it is also very funny.”

Having ended the series with a cliffhanger, Sister already has ideas in development for a second outing, which could track Sam’s trading activity as she becomes more adept. Meldal-Johnsen believes it has the “broad appeal” to be sold around the world, especially English-speaking territories and Europe.

Cleaning Up is one of ITVS GE’s three leading dramas at Mip TV, together with Mammoth Screen’s Vanity Fair and Mainstreet Pictures’ Age Before Beauty.

Meldal-Johnsen says the appetite for female-led shows is growing in the wake of The Handmaid’s Tale and the wider conversation around gender. “It feels like there is a time right now for actresses.”