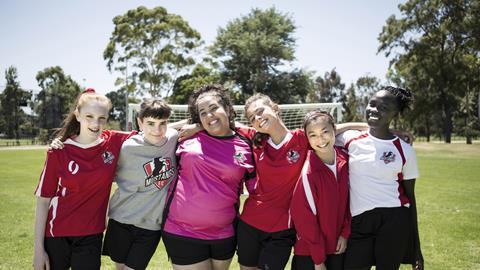 Mustangs FC is a comedy drama about teen girls who start their local football club’s first all-female team after being kicked out of their mixed soccer group at 14.

Against the odds, they stand united and aim to overcome any challenge that the club, the boys or the opposition can throw at them.

In counterpoint to Australian indie Matchbox Pictures’ internationally successful Emmy-winning drama Nowhere Boys, the focus here is firmly on what it means to be a girl.

“We didn’t just set out to make a show aimed at girls,” says executive producer Rachel Davis. “We wanted to make a show that would empower girls and celebrate female friendship in all its complexity.”

Set against the backdrop of the aspirational Aussie beach lifestyle, the series has a lead cast of six teenage girls and features storylines about equal rights, mansplaining and why you don’t have to laugh when a boy tells a joke that’s not funny. Some 60% of the cast and crew are female.

Nevertheless, season one’s audience was split firmly 50/50 along gender lines. “It shows that boys are ready to support a show about girls with balls,” says Davis.