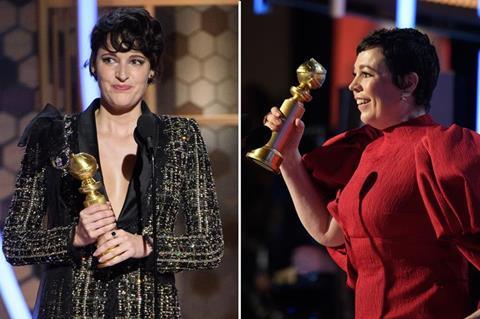 Phoebe Waller-Bridge and Olivia Colman were among the British winners at the 77th Golden Globes, as Jesse Armstrong’s Succession and Sister’s Chernobyl also triumphed.

The Fleabag creator collected her first ever Globe for best television series musical or comedy actress for the second series of Two Brothers Pictures’ BBC3/Amazon comedy, and was back on stage at the Beverly Hilton later in the ceremony when her show was named best musical or comedy TV show.

Colman won only one of two Globes for Netflix on the night, after the SVoD secured 34 nominations for film and TV, claiming best television series dramatic actress Globe for her portrayal of current British monarch Queen Elizabeth II in Left Bank’s The Crown. Her predecessor in the role, Claire Foy, won the same award in 2017 and was nominated again a year later.

Meanwhile the second series of HBO’s Succession, which aired in the UK on Sky Atlantic, picked up two awards - TV series drama and best television series dramatic actor for Brian Cox.  It was the first Globes win for Cox, who plays media baron Logan Roy, in a 60-year career.

In film, Mendes was named best director for his First World War film 1917 and did his Oscar prospects no harm in the process. The wins for the film, made through Mendes’ production company Neal Street Pictures, capped a good night for All3Media, which also owns Two Brothers.

Taron Egerton was named best performer in a motion picture – musical or comedy for playing Elton John in Rocketman. John, Egerton’s compatriot and the film’s inspiration, took to the stage to collect an award of his own as he shared the best song award with old friend and collaborator Bernie Taupin for ’I’m Gonna Love Me Again’.

British director Chris Butler accepted the best animated film Globe for Laika’s Studios’ Missing Link in arguably the biggest shock of the night. Disney releases Toy Story 4 or Frozen II had been regarded as frontrunners in the category.