NEP Visions has confirmed the extent of the damage caused by the fire which ripped through its Bracknell HQ on Tuesday evening. 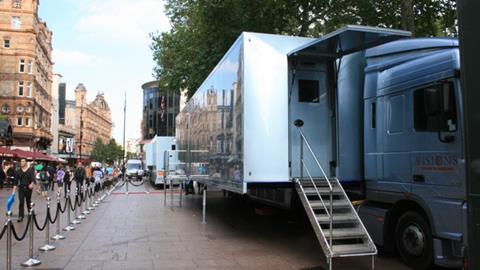 Three large OB units, including its Gemini (pictured), HD3 and HD2 trucks were destroyed in the blaze.

The company said that despite the reduction to its fleet of vehicles all events and productions it is scheduled to cover this weekend, including Premiership and Championship Football, WWE and Channel 4 Racing, will be serviced.

NEP Visions is part of the US-based NEP Broadcasting group of companies which in the UK includes Bow Tie Television, OBS TV and Roll to Record as well as a host of European OB firms such as recent acquisitions Record Lab and Outside Broadcast.

Across the UK and Ireland NEP has 16 HD OB units and nine VT and support trucks in operation. It also has 32 more HD OB units in Europe.

NEP’s Gemini, HD2 and HD3 were all double-expander trucks.

The 16.7m long HD2 and HD3 trucks each housed a Grass Valley Kalypso mixer, Calrec Sigma audio consoles and up to 18 replay and record devices with room for a production team of 11 in each vehicle.

NEP Broadcasting president and chief operating officer Keith Andrews has flown from the US to the UK to oversee the medium and long-term actions related to logistics, facilities and equipment, while

Jenkins (pictured) said: “The response to this event is a testament to the NEP family’s resilience and team spirit in the face of adversity.

“It is also a strong demonstration of how our industry pulls together in difficult times.  We are confident in our ability to continue serving our clients in both the short-term and long-term, thanks to the rest of the NEP Worldwide Network and the immediate help of our industry partners.”

Aerial photos of the aftermath of the blaze showed the roof of the building had collapsed and a dozen large OB trucks lined up around the perimeter of the site.

No one was hurt in the fire, the cause of which is now under investigation.