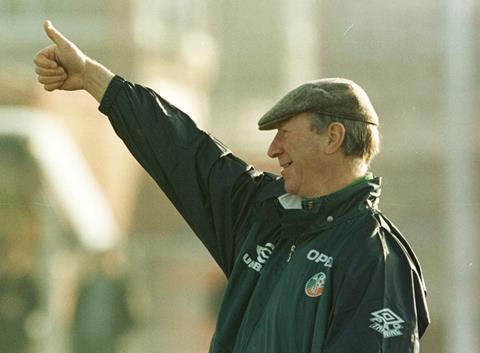 The creator of hit sports doc Bobby Robson: More Than A Manager, Noah Media Group, has started production on a feature length documentary about footballer and manager Jack Charlton.

Noah Media Group, whose credits also include Steve McQueen: The Man & Le Mans and the soon to be released cricket documentary The Edge, has partnered with Jack Charlton and his family on the project.

A theatrical release is planned for summer 2020 – thirty years on from Italia 90, when Charlton led the Republic of Ireland in their first ever World Cup.

Using rarely seen archive, the film will explore the story and legacy of the team and of Charlton.

The film will be directed by Gabriel Clarke (Bobby Robson: More Than A Manager, Steve McQueen: The Man & Le Mans) and Pete Thomas (Euro 2016: Sounds of the Summer) with former Republic of Ireland captain Andy Townsend joining as an executive producer. It will be produced by John McKenna and Torquil Jones.

Charlton won the World Cup as a player with England in 1966, alongside brother Bobby Charlton, always the more revered player. However, the more outspoken Jack was a household name as pundit and TV celebrity by the early 1970s before turning his hand to coaching.

The documentary will feature star players and key characters from throughout Charlton’s career, as well as new interviews with Charlton and for the first time, his family, alongside contributions from figures in Irish music, film and politics.

This will be the latest film released through Noah’s distribution arm, NoahX. The film’s release is scheduled for the summer of 2020, ahead of UEFA Euro 2020.

Co-director Gabriel Clarke said: “I remember Jack Charlton being as surprised as anyone when he got the Ireland manager’s job in 1986. What followed changed lives, altered careers and transformed a nation and it is a privilege to team up with the Charlton family and so many of those who made it possible to get to the heart of this funny, emotional and inspiring story.”

John Charlton added: “We are delighted to be working with Noah Media Group on what will be the definitive film on my father’s life. It will be fascinating to see how the film links his life as a husband, father and brother to his incredible achievements in football, as both a player and a manager.’