Idents that capture the elegance of cinema, featuring the genres of romance, action, sci-fi, western and thriller. 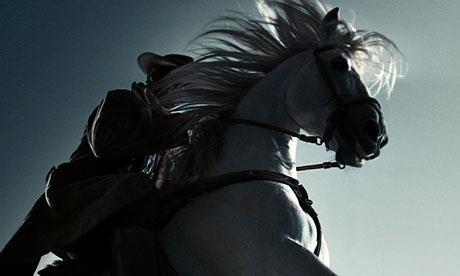 Brief Create idents that capture the elegance of cinema, featuring the genres of romance, action, sci-fi, western and thriller.

How it was done Directors Ben Campbell, Simon Goodrick and Adam James used 35mm and Phantom cameras to produce single-shot idents that were captured by DoP Tim Green in super slo-mo. The Mill Studio team then used FCP to edit and Nuke for the compositing.

Luke Colson, the head of Mill Studio, said: “By keeping everything simple, clean and emphasizing what was shot in camera, we used Nuke to be able to push the boundaries of the Studio forward to create five cinematic masterpieces.”

The idents also feature a music track exclusively composed by Noah and the Whale. The indie folk band were approached by the creative team after their album provided inspiration during the edit.

TCM creative director Simon Goodrick: “Our aim was to create a series of idents that would capture the beauty and elegance of cinema: this was achieved using only one shot and accentuated by shooting at high speed on the Phantom. A consistently neutral background colour, The Mill’s excellent post-production skills and persuading Noah and the Whale to create the music have all contributed to a successful project that delivers something truly cinematic, fresh and contemporary”