Among the updates is integration of Dropbox Replay 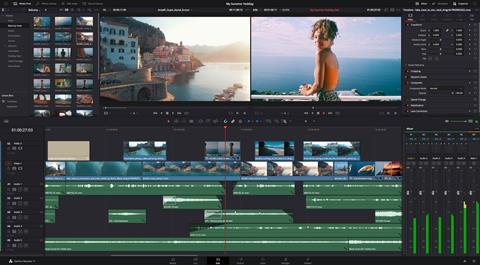 The update allows it to work up to five times faster on Apple Mac models with the M1 Pro and M1 Max chips, allowing customers to work with up to 12 streams of 8K footage.

It also increases the decoding speed of 12K Blackmagic RAW files, making it over 3 times faster and H.265 rendering is also 1.5 times faster. In addition, DaVinci Neural Engine performance is up to 4 times faster.

Also, with a simple login, customers will only have to sign in once. Other features include quick and easy render set up with dedicated Dropbox and Dropbox Replay presets as well as automatic background uploads that are monitored for status and confirmed when complete.

Grant Petty, Blackmagic Design CEO, said: “To have the capability now to easily edit and color grade Blackmagic RAW 8K footage in HDR and all on a laptop while you’re miles away from the studio is incredible. Plus the ability to easily collaborate on projects with Dropbox Replay makes it such an exciting time for our customers to be out there creating content. We’re very excited to see what our customers can do with this amazing update to DaVinci Resolve.”

In addition to the software update, Blackmagic has announced a series of price drops on DaVinci Resolve keyboards and panels.