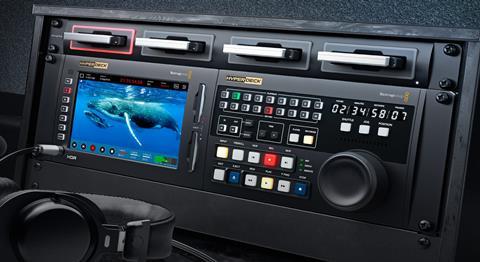 The HyperDeck Extreme builds on the Hyperdeck with new innovations such as H.265 files, optional internal cache, 3D LUTs and HDR support. It has the ability to record up to 4K in H.265, and is designed for use in broadcast and live production.

It also features a touch screen user interface with built in scopes and HDR screen, on which users can see their recording as well as control over all deck settings. Users can also add HyperDeck Extreme Control to transform it into a traditional broadcast deck.

In addition, it includes 2 media slots, 12G-SDI, analog connections for archiving, USB-C external disk recording, plus a front panel speaker and headphone jack. There’s also an optional cache that eliminates dropped frames if their media becomes full or is too slow. Both AC and DC power connections are also included for studio or on location use.

“There are so many features that this advanced record and playback deck is the perfect solution for the next generation of broadcast, live production and digital signage.”