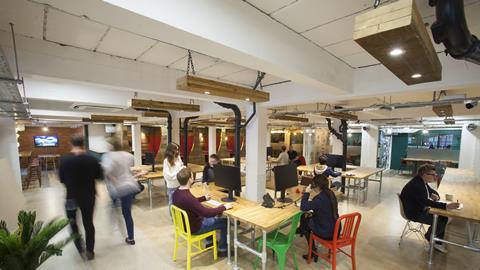 Creative hub for production and post opens in Wapping

A home for small creative companies near St Katharine Dock

The aim of the project is to “bring together London’s best creative professionals and small companies in TV production and post to work under one roof ”, said Cherryduck Studios chief executive James Vellacott.

The Nest’s in-house facilities include 12 edit suites running Adobe Creative Suite and four ‘private’ edit and grading suites, rentable by the hour, that are capable of handling 4K content. It also includes an audio studio with voiceover booth.

All of the hub’s editing and grading suites come with both The Nest: facilities include a communal space that can accommodate 50 people

Adobe Creative Suite and DaVinci Resolve, along with a Resolve Mini grading panel. 4K monitoring is via Eizo CG248 reference monitors, while there are separate 49-inch LG 4K TVs for client viewing.

The edit suites’ server system was devised by Cherryduck Studios with New Media Research (NMR), and is built around an assortment of products, including GB Labs’ Space, Hyperspace, Echo and Mini Vault LTO technology.

Elsewhere at The Nest, there is a screening room, meeting rooms, a café bar and communal space that can accommodate up to 50 people.

The hub is covered by secure high-speed internet and desk space can be rented monthly, inclusive of utilities, business rates and wi-fi. Prices start at £400 a month.

Cherryduck Studios said the main driver for creating The Nest was to meet increasing demand for affordable creative and production services in the area.

Vellacott said: “With the surge in demand for digital content and the explosion in the number of TV production companies, London’s wealth of young creative post- production talent and the ever- growing need to collaborate with other creative sectors, we feel The Nest will prove to be a popular high- quality workspace hub just around the corner from Shoreditch.”