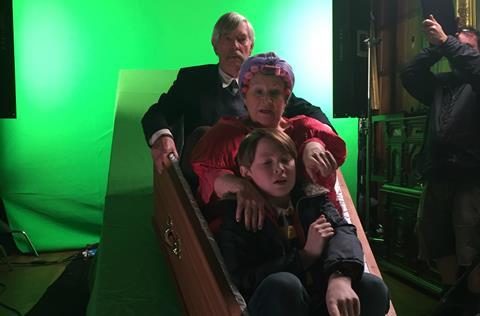 Brief Physical special effects company Artem was commissioned to design and build a coffin that travelled down a flight of stairs and burst through the front door of a nursing home, as part of a stunt sequence for the TV production of David Walliams’ book Grandpa’s Great Escape,

How it was done The coffin, which carried three performers, was designed to slide down the stairs on a running strip. A set of rollers were attached to enable it to be accelerated along a 20-metre track and launched from an angled ramp, through the balsa wood replica front door that was also constructed by Artem. The coffin was also used against a green screen for close-up shots so it had to look authentic. “We built the coffin around a padded steel frame, which provided both safety and comfort for the performers. It was great fun to film,” said Artem Supervisor, Mike Kelt. This is the second David Walliams’ Christmas release Artem has provided special effects for, the first being Mr Stink in 2012.