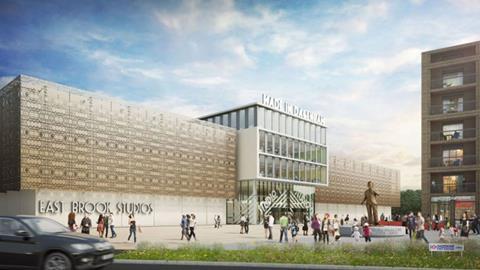 Barking and Dagenham Council is inviting expressions of interest for the creation of a new large-scale TV and film studio facility in Dagenham East.

The proposal to build a bespoke complex near the Londoneast-UK business park follows the publication of a feasibility study that suggests that an extra 1,220,000 sq ft of studio space could be required for features and high-end drama production in London by 2032.

The size of the complex is still be decided but indicative layouts have been drawn up covering 18.7 acres with a minimum of 125,000 sq ft of studio space plus workshops and vehicle access.

The report forecasts that a large studio could create 780 full time jobs in the local area and generate £35m for the economy.

A formal tender process for the creation of the studios will start in 2018.

Mayor of London Sadiq Khan, Film London chief executive Adrian Wootton and the leader of Barking and Dagenham Council, councillor Darren Rodwell, are among those backing the plan.

Wootton said “purpose-built facilities in Dagenham promise to be a tremendous boon for our industry and cement our status as one a global centre for content production.”

The feasibility study was commissioned by Film London, the London Local Enterprise Panel and the London Borough of Barking and Dagenham.

The study team was led by the economic consultancy SQW and included BBP Regeneration and Professor Richard Miller of the University of Hertfordshire.

Barking and Dagenham Council bought nine acres of land at the proposed site in Dagenham in December 2016 for £12m.

Barking and Dagenham Council’s urban regeneration company, Be First, has been charged with finding suitable partners to build and operate the complex. More information is being made available at www.befirst.london

The deadline for expressions of interest is 20 December 2017.