Company expands to the UK, offering bespoke driving plates with views out of cars driving through any location 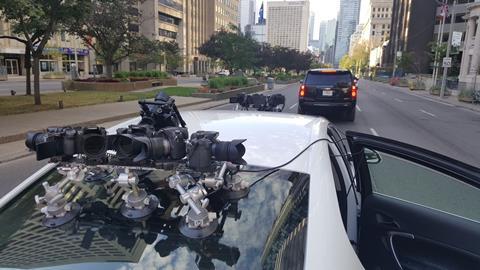 Up to nine cameras are used in the rig to capture 360-degree images from a single vehicle driving around any location.

As well as bespoke plates, it has a regularly updated stock footage library of driving plates, with 6,200 clips covering 16 countries and 80 cities.

The company’s footage has been used in The Commuter, The Post, The Big Bang Theory, Grace and Frankie and Tom Clancy’s Jack Ryan.

Driving Plates’s UK team will be led by producer Ian Sharples who has more than 20 years of experience working in film and TV industry and won a BAFTA in 2007 for his work on Terry Pratchett’s Hogfather.

Driving Plates CEO David Smith said: “Launching a UK division is a significant step in our expansion plans. It makes sense to open up an arm in the UK, a country which has such a rich history of providing world-class production services.”

Some footage of London, captured by Driving Plate’s rig is shown below.