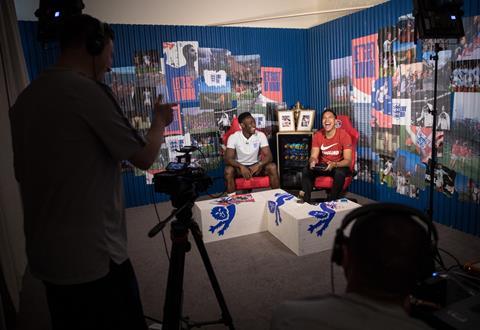 The show has been devised to enhance fan engagement and create positive sentiment around the FA brand. It features interviews with England players, live viewer polls, three or four pre-recorded VTs per episode, and FaceTime Q&As between England players and fans.

It is hosted in a temporary studio within the England team’s hotel in Rupino, and is remotely produced in the UK, using two live camera feeds from Russia.

The production is extremely streamlined compared with a conventional TV broadcast. A skeleton crew of around six is responsible for creating and producing Lions’ Den. Its two full-time producers – Tony Watson and Zander Brown – are based in Russia, and there’s a small production team in the UK.

“For the studio set-up, we have one producer doing the lighting, producing the presenter, maintaining audio levels and so on, and one running VTs via [live video streaming production software] Wirecast,” said the FA’s senior video manager Damien Cullen.

“When they are on location, one producer has a LiveU [portable cellular backpack] on his back and operates the camera, does sound and produces the show, while the other films VoD features.”

“The running order for the show is agreed by around 10am each morning, when we know which England player we’ll get to interview,” added Cullen. “Then the guys will start creating the VTs and decide on the subjects for the polls. Each show has four or five central elements that are adaptable but give us a skeleton to build off.”

During the show, which is usually broadcast around 5pm, the live camera signals are transmitted using a dedicated line from the studio in Russia to the UK. An operator with a laptop running video production and publishing tools Grabyo Producer and Singular. Live adds in all the graphics prior to the show being pushed out to YouTube. There’s a short delay – around nine to 13 seconds – between the camera feeds leaving Russia and the content appearing ‘live’ on YouTube.

“The challenge for me, from a live perspective, is encouraging live feedback from the audience and making them feel part of the show,” said Cullen.

“One of the biggest things we’ve done technically to fulfil our key objective of linking fans with players is doing a FaceTime call live on the show. Anyone can phone into the show and talk live to an England player.”

The return on investment for the FA in producing Lions’ Den is measured by sentiment, Cullen says, which is “always a tricky one to measure.”

“You can take viewer stats any way you want and make yourself look good, but by measuring the number of likes, comments, shares and how long people watch each show, you get a pretty good overall impression of how it’s being received,” he said. “It’s a 25 to 30-minute show, and internally people thought that was a bit too long. But we’re seeing that the longer it goes on, the numbers aren’t dropping off, and people are really engaging with it.

“There’s a big dive into the metrics after each show, as we have to make an honest appraisal of the investment of doing the show and ask, ‘Did it work?’ and, ‘Is this something we want to do more of?’”

At the time of going to press, each episode of Lions’ Den was typically picking up around 30,000 views on the night, rising to up to 100,000 views in the following days.