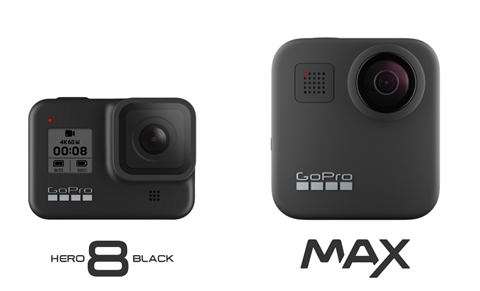 GoPro has launched two new cameras, the Hero8 Black and the Hero Max.

The Hero8 Black is 14% lighter than GoPro’s flagship Hero7 Black and has a 12-megapixel camera sensor with improved HDR.

It also has new HyperSmooth 2.0 video stabilization to help smooth out bumpy video, wind-noise reduction and can shoot 4K video in addition to slow-motion video.

It is designed to connect to a new range of hardware add-ons targeted at vloggers. Users can now bolt on three optional accessories: a shotgun microphone for improved audio; a small light to help in dim conditions; and a flip-up screen, allowing self-shooters to frame themselves

The Hero Max, meanwhile, has two lenses and can record sharper 5.6K video in 360-degrees. There’s also a new Max SuperView ultra-wide camera mode, it can livestream in 1080p and offers an option that lets users automatically backup videos and photos to the cloud. It also has six microphones, which GoPro says will offer the “best stereo sound ever” from one of its cameras.