The tech combines the Acuity switcher with the Ultrix routing and AV processing platform. 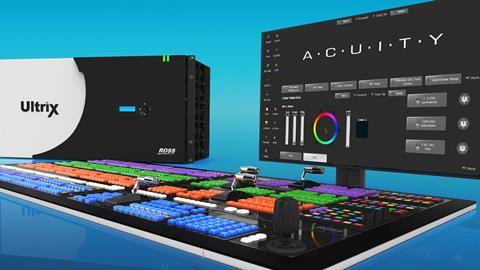 Ross has released Ultrix Acuity, which aims to combine the Acuity switcher with its Ultrix routing and AV processing platform.

It’s small size is a plus for OB vans, mobile units, and other space limited areas, and it is recommended to add 2RU of rack-mounted redundant power to have complete system in just 7RU.

This flexibility means it is possible to transition from HD to UHD through a license, mix SDI and IP sources in the same frame transparently, and use tie-line management tools to incorporate the system into a larger distributed routing fabric. In addition, power, cooling, maintenance, and support costs are expected to be significantly lower.

In addition, it can become one node of a larger distributed routing environment, reducing the incremental cost of adding I/O and further production switchers.

Nigel Spratling, VP of production switchers, Ross Video, said: “Our customers have been focused on increasing efficiencies, reducing costs and embracing new signal transport and management schemes. By bringing together an entire suite of necessary production solutions, we’re providing an answer to this need and delivering a compelling new platform that works for 2021 and beyond.”