£250k invested in state of the art, 10 seat screening room 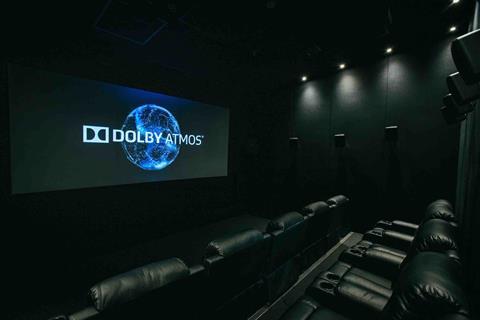 Visual Data Media Services has invested £250k in a new 4K and Dolby Atmos cinema at its facility in West London.

The 10-seat theatre is built around a NEC 4K projector and fed by a Doremi digital cinema server. A Dolby Atmos CP950 sound processor is linked to 28x JBL speakers and 14x 1KW Crown amplifiers.

It has a four metre wide acoustically transparent woven fabric screen, designed to Dolby and THX standards, which Visual Data Media Services say allows users to hear the cinema audio without the distraction of the perforations that are typically required to allow the sound from speakers mounted behind the screen to travel into the auditorium.

“This is the final time that many of our clients will see their film before it is distributed to the cinema network and it’s important that they have no visual distractions and are also assured that they’re reviewing their content in a high-end and fully calibrated environment,” said David Margolis, director of digital cinema at Visual Data Media Services.

The digital cinema suite also features a smaller 2K screening room for subtitle and audio description checks and two 4K QC and mastering suites equipped with the Clipsters by Rohde and Schwarz and Cortex by MTI Film.

The theatres were designed by Peter Delfgou who has been designing and building cinemas since the 1960s including his own facility, Soho Screening Rooms (aka Mr Youngs). The build was project managed by Margolis, with equipment installation and calibration carried out by Bell Theatre.

“This is a major investment following our acquisition of Soho Digital Cinema in April,” said managing director, Symon Roue. “We are delighted to match the in-depth experience of the SDC team with such a state-of-the-art facility, and it reiterates our desire to keep investing in the business and expanding on the services we can offer our clients.”